We are loving New Zealand so much we are finding it difficult to keep up with the blog! Its an amazingly beautiful country. Even the pictures we take don't seem to do it justice. We've been here a little over a week, and have traveled almost to the bottom North Island. Tomorrow we move on to Wellington, and there we will schedule a ferry crossing down to the South Island. But I am moving on too quickly, I can't write about everything we did in the last week in one post, so lets start out by saying that we enjoyed a luxurious few days in Auckland, including a wine tour on Waiheke Island and a hike on Mt Eden before we picked up our camper van, which will be our home for the next 3 weeks. Here's a view of Auckland from the summit of Mt Eden: 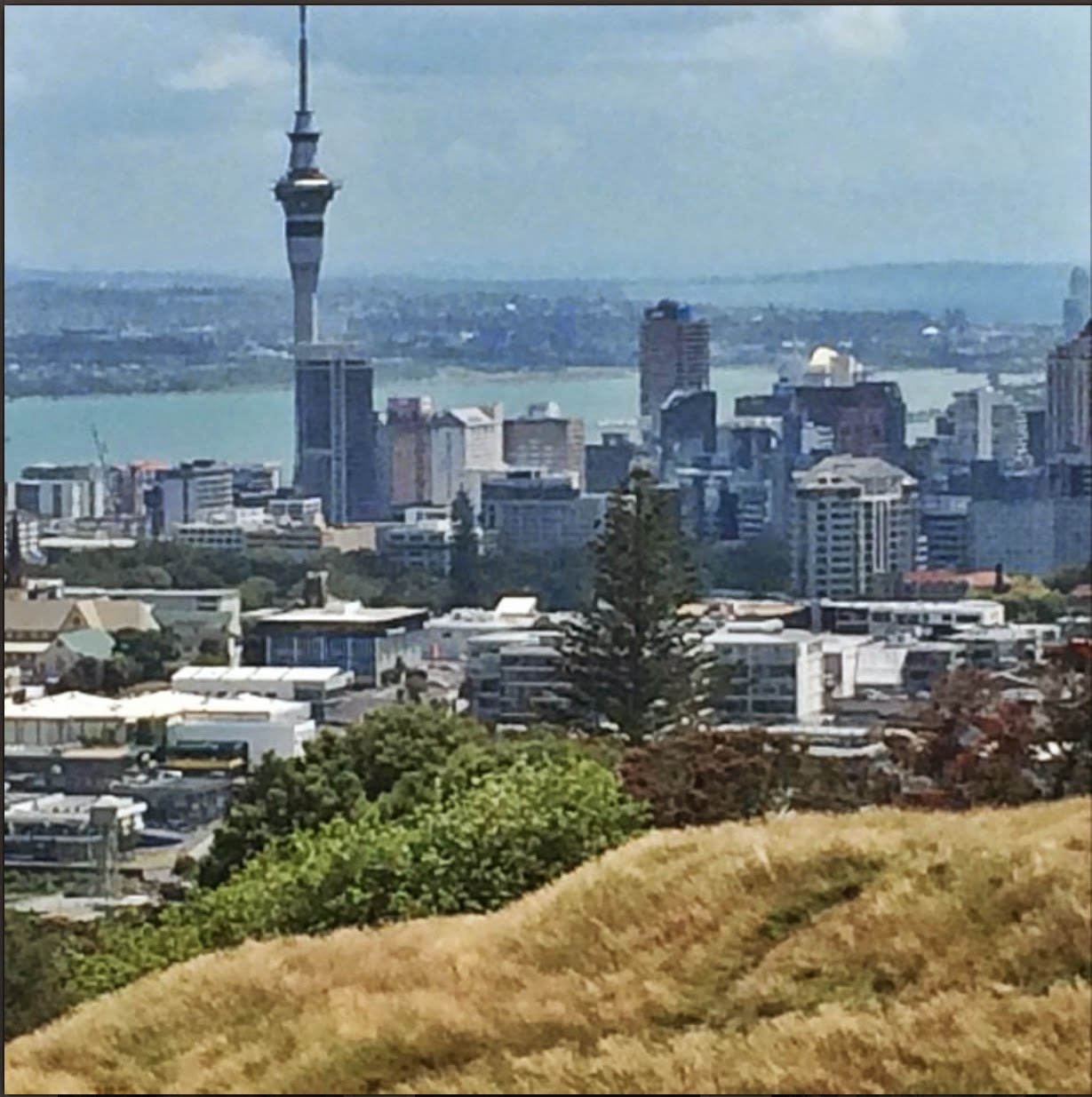 Wine? Yes, have some! 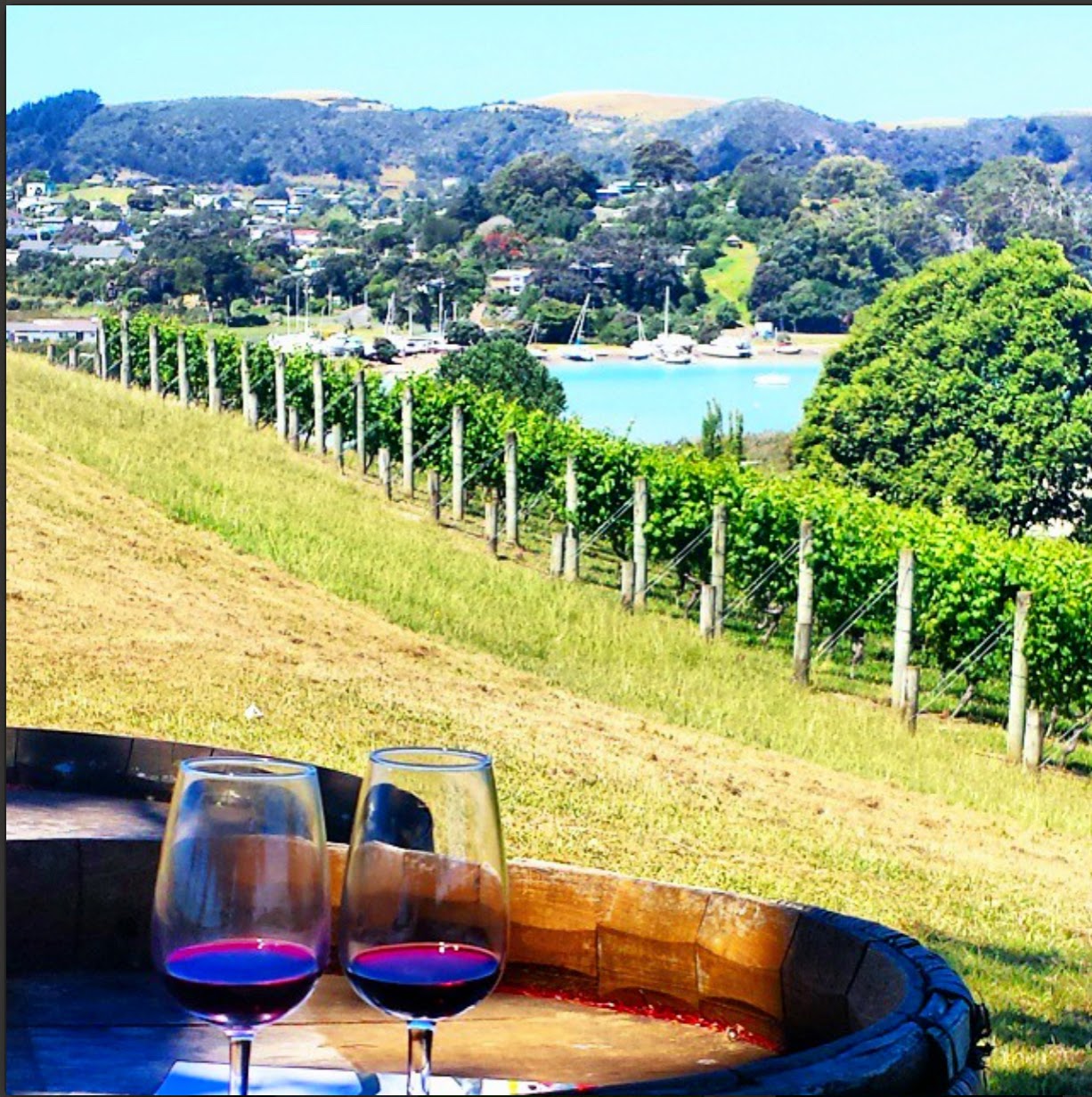 We decided to drive out to the Coromandel Peninsula, where we had heard the best beaches are on the North Island, and picked Hahei at random. Here's the cathedral of Cathedral cove: 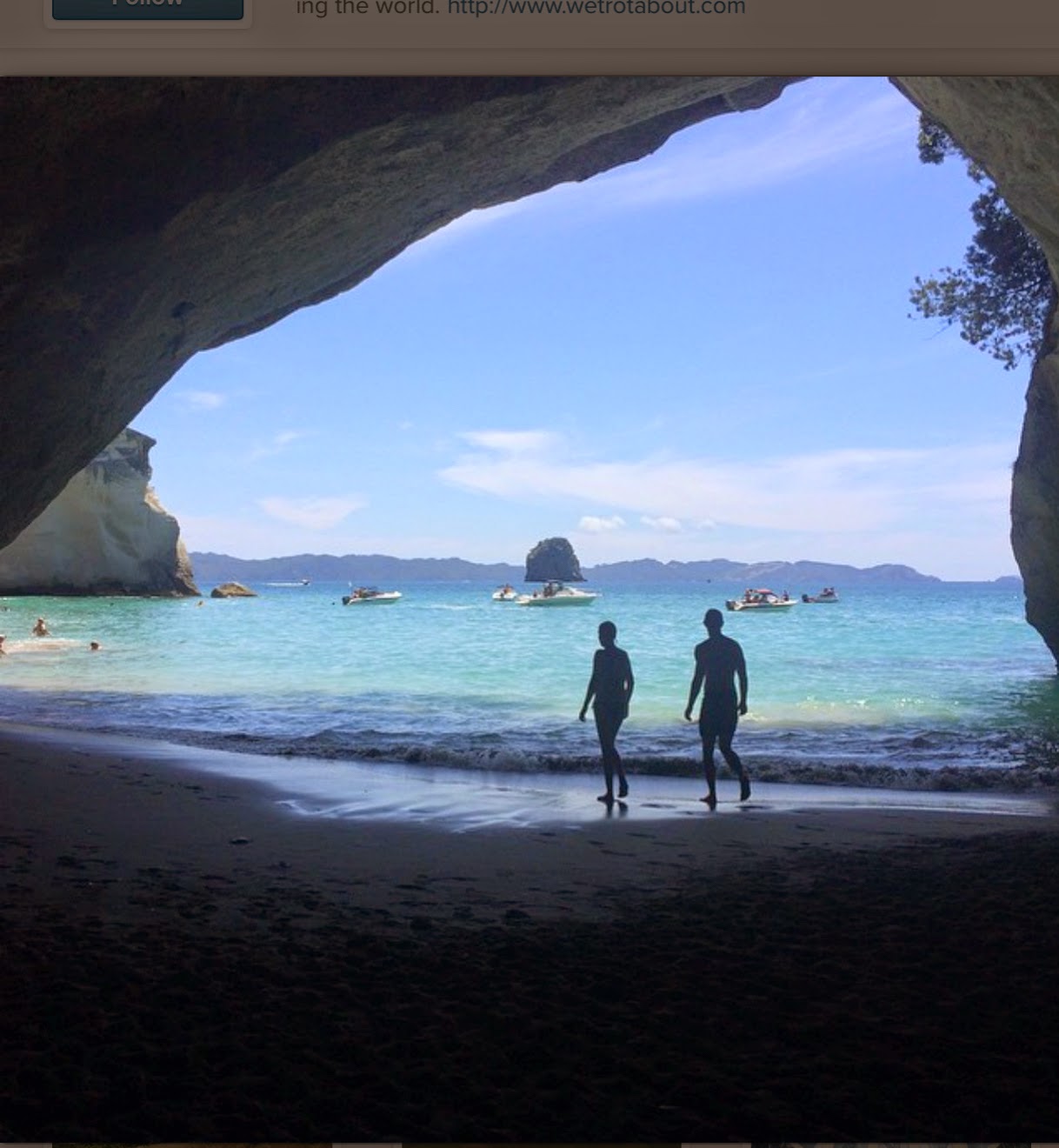 We found a "holiday park" near the beach and settled. Theres nothing really to compare these places to in the States, but they are all over NZ. They are like a super nice campground, with pools, hot tubs, full kitchens, showers, lounges, all the comforts of home. And you just park there, based on what you have-campers, motorhomes, or just plain tents. It's per person, about $20 to $30 a night.

So  we went hiking from Hahei to Cathedral Cove with stops at Gemstone Bay and Stingray Bay where Andy had a chat with a comorant (or something similar). He didn't say much. These beaches were just gorgeous, as the pictures show. It was quite a hike, similar to the Kalalau Trail we did on Kauai. 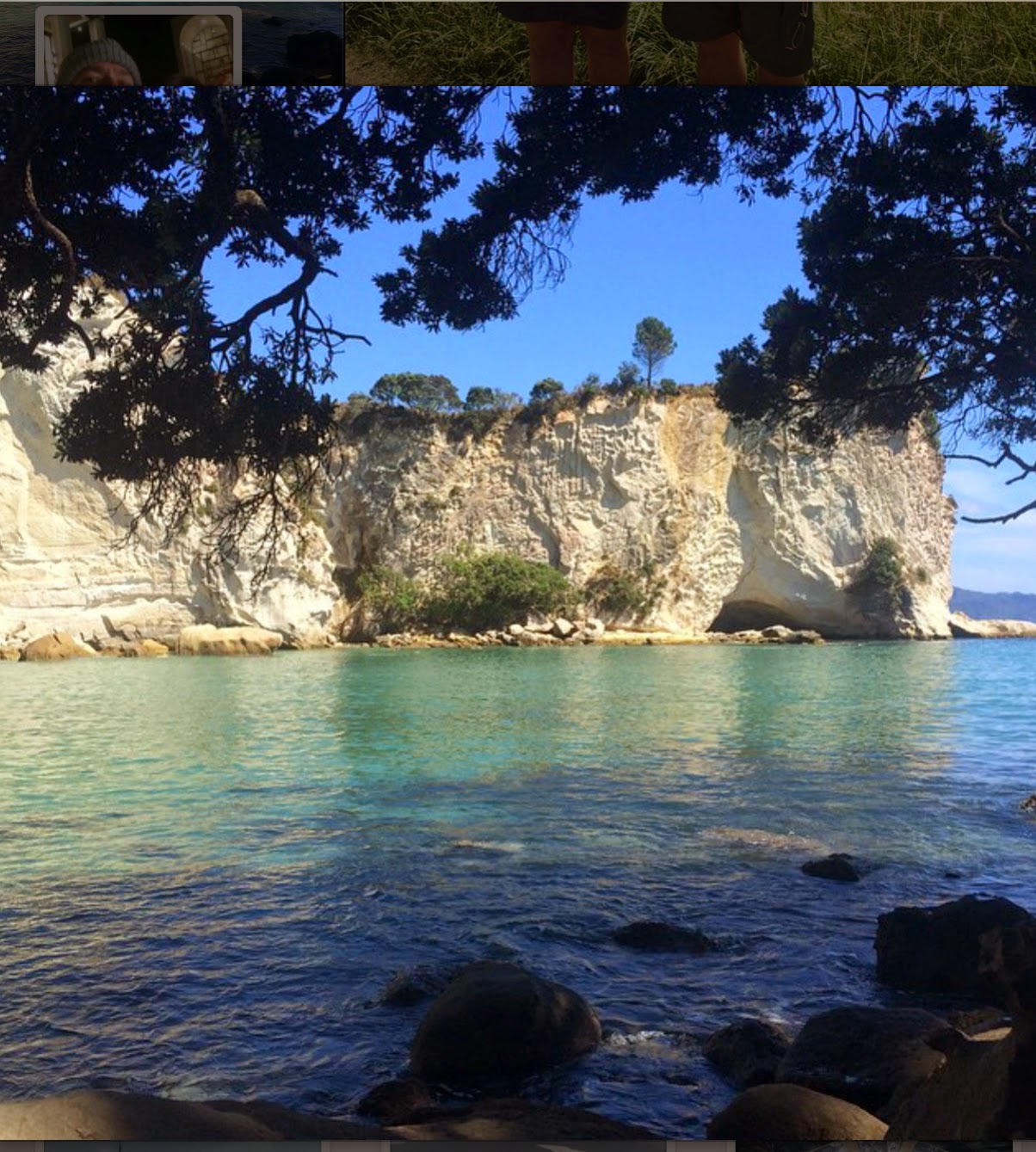 We took the water taxi back to Hahei. This boat anchors, stretches his anchor until it hits the beach, drops the gangplank, unloads and then loads up passengers in the pounding surf, pulls it all up and away you go. Sounds simple but it looks like imminent death. Still, he made it look easy.

When we got back, we met a ukelele player name Jeremy and his girlfriend Alice. Within the next hour, we had met the people from the campsite nearby. Next thing we know Andy's playing for like 50 people on the beach. A surreal experience playing "Sweet Home Alabama" by request, and having all the Kiwis singing along to it. To say nothing of the billions of stars! The Milky Way so clear! 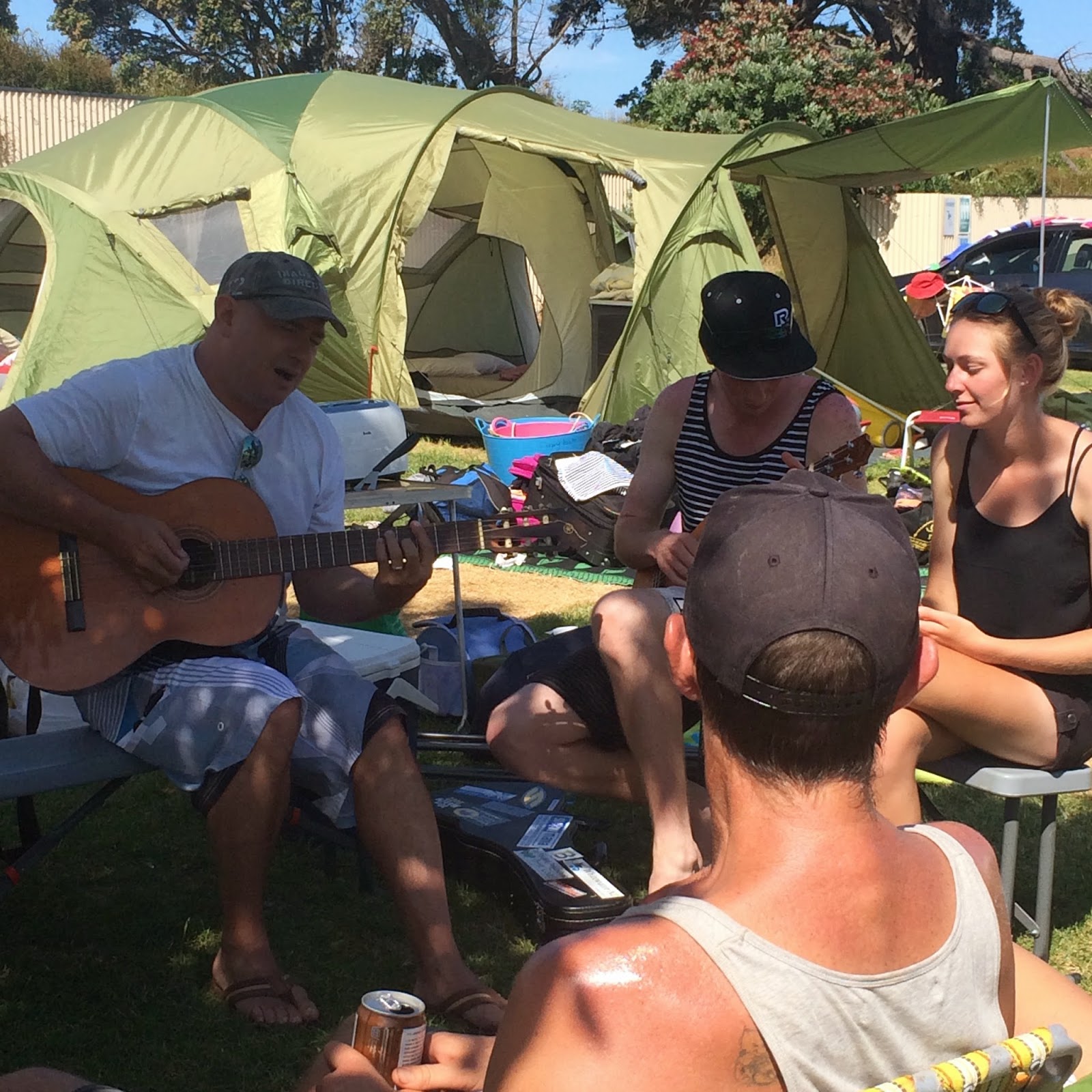 Next morning we packed up and scooted out. Got all the way to Rotorua (about 100 miles South) and discovered we left one of the backpacks at  our neighbors campsite. Oops. Equal fault, we both missed it. Panic. Phone calls made and YAY! they had it. We had to drive back the next day and pick it up (and its contents like my sneakers and LuAnn's cards). Ugh. Well, if you have to have a screwup (and you will on any RTW trip) it's best to have a minor one.

Next up: Rotorua and points South.