Here we are in Kaiteriteri, South Island of New Zealand and the gateway to Abel Tasman National Park, named for Abel Tasman, an interesting dude.

Apparently you can live in the national parks here if you are rich enough, tons of gorgeous houses seem to dot the  slopes on the roads leading in. Once inside the park though, its all hiking, or as the Kiwis call it-tramping. However, as usual, I'm ahead of myself.

After arriving in Picton on the ferry from Wellington we drove straight to Blenheim & stayed at a holiday park. This was th coldest night we have yet experienced. This area is known as a wine tasting area, and although we were tempted, we had done this already so we moved on towards Abel Tasman. Next morning we drove through Nelson, and considered stopping, but pressed on through the mountains to Kaiteriteri which has a lovely beach, and is considered the gateway to Abel Tasman. 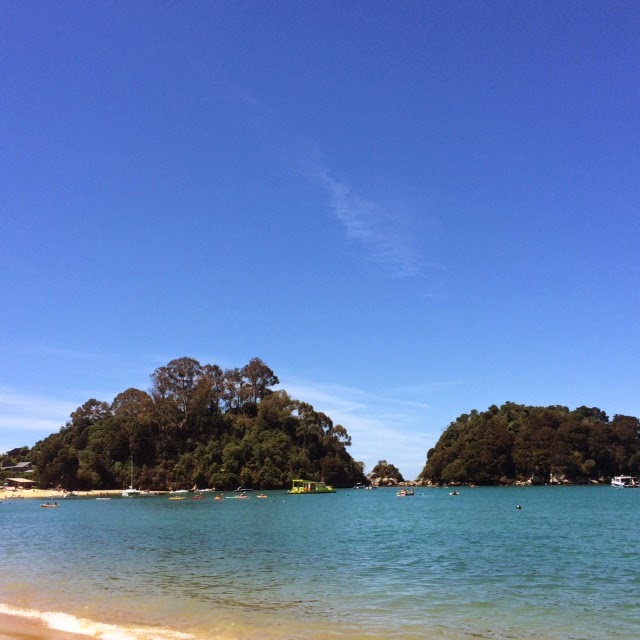 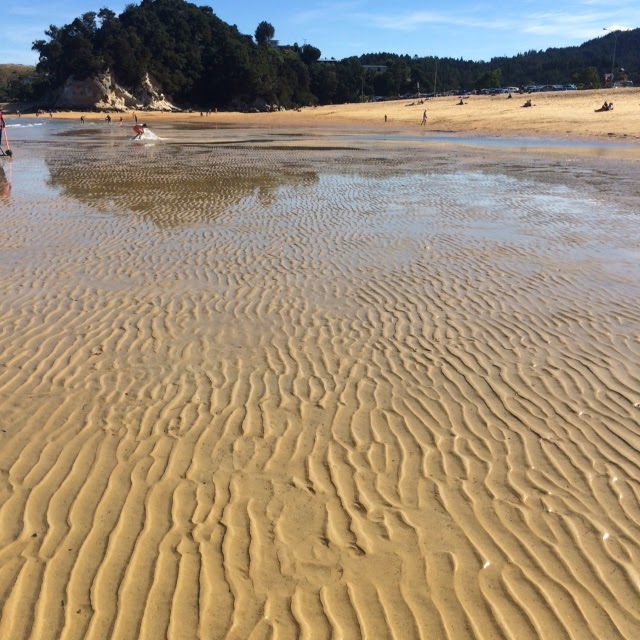 We pulled into the holiday park here and promptly stayed two nights. Again, we were the least prepared campers at a professional campers paradise. The second day here we took a day hike on the Abel Tasman Coastal Trail. Although in miles, it wasn't much, but with the changes in altitude involved, it was quite challenging. It led us to some outstanding nearly deserted beaches and plenty of photo ops. We had Porters Beach basically to ourselves, and Andy built a sandcastle on a sandbar at low tide.

Got up this morning, got ready, got some supplies for lunch and drove up to split apple beach which was fab, if kinda narrow at high tide. Carried on to Marahau where the road kinda ends. THere in the parking lot a fat rooster scared us both with the most dinosaur noise Ive ever heard RRRRREEEOOOOAAAARRR! Jesus! We almost shat.

Dried off naked on the beach, then got dressed and headed back. Had pizza and beer at the local pub called The Beach Whale and played a few games of pool. I sucked horribly compared to my normal standard but apparently I haven’t played in years.

Tomorrow we go to the north end of abel tasman and hike some more. Good times!