Four days in Istanbul seemed to be just about right. Possibly even a bit much. It did not turn out to be among my favorite places we've been so far. Many more pictures HERE and HERE.

Day 1 was already rough as we had gotten up super early for our flight from Singapore and LuAnn was not feeling well. The Ataturk airport was a truly wretched affair, even worse than NYC which takes some doing. The immigration line had about 4000 people in it and the customs guys were in no hurry at all. Worse, for some reason, they decided LuAnn's documentation had a problem but since they barely spoke English no one could tell her what it was or what to do and I was already through so I couldn't come back to help. I have never seen such a surly bunch of unhelpful civil servants. They make the DMV look friendly. I was not pleased. For better or worse English has become the lingua franca of the world. How do you have immigration officials in an International airport who don't speak english at all? Dafuq? Anyway, finally they just let her through after a trip to another line for another stamp, but still no explanation.

The whole thing took so long that our luggage was nowhere to be seen. Finally we managed to locate it off to the side but again, completely unhelpful and unfriendly staff. We did manage to get a pocket WIFI device and the young lady there was both helpful and friendly and improved my mood a bit. Getting the train and a cab to our apartment was no problem.

The apartment had many hilarious features. The bathroom was such a tiny closet that the water heater was over the toilet, so low you would bang your head on it every time you stood up. The view of the Bosphorus was stellar but the lack of screens made sleeping difficult due to mosquitoes. The galley kitchen had these ridiculous swinging saloon doors...I can't even. However, Ali, our landlord was sweet and kind, and gave us a complete walking tour of the small section of Istanbul we were in, introducing us to all the shopkeepers as we went, including his father, the butcher. That whole experience reminded us of why we love to stay in apartments over the impersonal hotel. Think that happens at the Hilton? 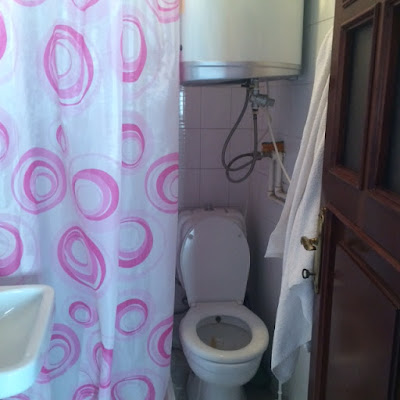 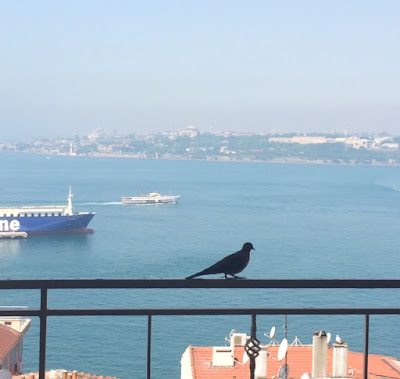 We were, however, treated to some unexpected fireworks that first evening though.


Day 2 we hit the local cafe and enjoyed the Italian-style coffee and simit, a sesame pretzel-type thing, but without the twist, just a circle. I was getting some Turkish down so it was a bit easier. The ferries across the Bosphorus were cool, cheap and ran regularly. We visited The New Mosque, dating from the 1600's. Needs a new name. Lovely though. 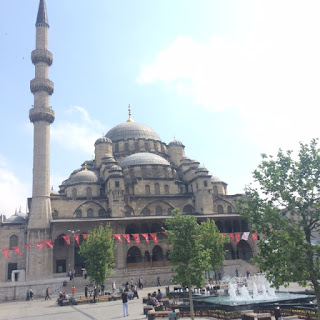 Afterwards we hit the market behind it where LuAnn got some tea. Kudos to the young handsome Turk who sold it to her, since generally she doesn't even drink tea! We walked down to the Sultan Ahmed Mosque, AKA The Blue Mosque but it was closed for prayer so we went to Hagia Sofia for a few hours. What a crazy place. It's been a temple of some sort for at last 1000 years, first Christian, then Muslim, then desanctified to use as a museum. Here you can see many Christian and Muslim religious works side by side. Well worth reading about. There was a cool Islamic art exhibition which I'll say more about at the end. 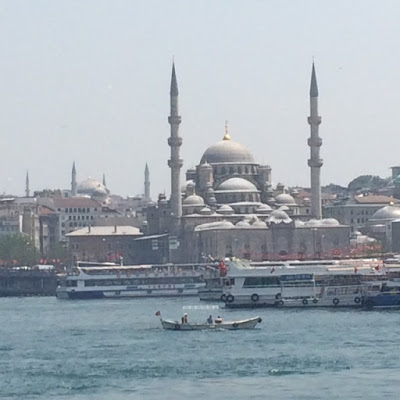 We then went back to the Blue Mosque, which was also overwhelming in it's size and scope, and recorded the call to prayer where the different mosques in the area call and respond to one another.


Right outside we saw the obelisk of Theodosious and the column of Constantine. The history stuff is my favorite part of this place, though much of that history is, in fact, awful. 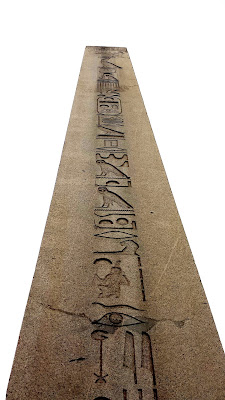 Then we got the streetcar back to the port and went back to Uskudar got some food from the local deli and ate at the apartment. Long day!

Day 3 we took the boat tour of the Bosphorus and saw many lovely buildings, though there was no narration so it was hard to know what we were seeing. At least it was cheap. Met three lovely Russian girls from Moscow down for the weekend from their jobs in Biz Dev at Price Waterhouse Cooper. 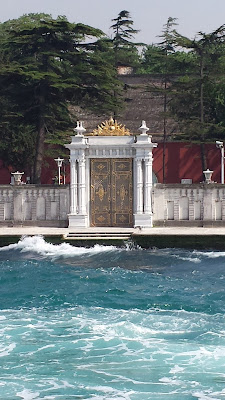 We had a lunch of shrimp in garlic at Sanat, under the Galata bridge where the waiters/hawkers      Ali (Baba) and "Jimmy" were very entertaining. After lunch we went to the Grand Bazaar and saw many amazing fabrics, carpets, ceramics, spice and tchotchke of all descriptions. After we walked down a street with many carpet and antique shops.

Next we got the streetcar across the bridge to Beyoglu and couldn't find the funicular so we hiked up to the Galata Tower but were too tired to bother climbing it. Instead we walked down İstiklal Caddesi (Independence Avenue) Taksim Square, stopping for a drink and some bruschetta on the way. Taksim is mostly known to foreigners as the place where most of the Gezi Park Protests took place a few years ago. It was not very picturesque for sure.

From Taksim we again couldn't find the funicular so we got a cab down the hill to Bashiktash and caught the ferry back to Uskudar and a cab home. Note all turkish spellings are anglicized here to make the best of it.

Day 4 we got the ferry again, and caught a cab through horrific traffic while the cab driver ranted in Turkish the whole way. We caught on that he was trying to tell us the cab couldn't go where our hotel (we had to move from the apartment after 3 nights) was as it's a train only road but eventually we caught on after being screamed at for 20 minutes, jumped out and walked the rest of the way.  We were both pretty shot so we had lunch at a place that had the clay pots that they cook the lamb in and they break the pot at your table. Very theatrical. After it was so crowded around the touristy areas are hotel was now located, we decided to have a nap instead. For dinner we found a place called Lucky Texans and had those burgers we've been craving. The Turkish owner told us he spent time in Texas and Florida, and just opened a few months ago, and so far, the Turks weren't really understanding his thick juicy burgers. We wish him well. His food was superb.

Next morning, it was time to go, and although we had emphasized that we needed the airport shuttle, they had failed to book it for us so we caught a cab and again dealt with the awfulness of the airport. In 30 countries it is easily the worst I've seen. In fact it's the only airport in the world I've seen that makes NYC look good.

On the upside we learned a lot about Islamic art. Seems calligraphy and decoration are the primary elements per the rules of Islam which I shan't get into here. In the exhibition we saw at the Hagia Sofia all the pieces had eight sutras (suhdras) illustrated in different patterns. The traditional pattern looks like this, where the main variations from piece to piece are in color and style of the calligraphy, backgrounds, and framing. Forgive these unedited pix: 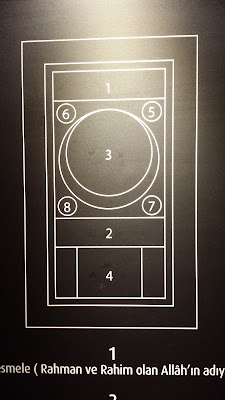 The translations of the eight sutras are these: 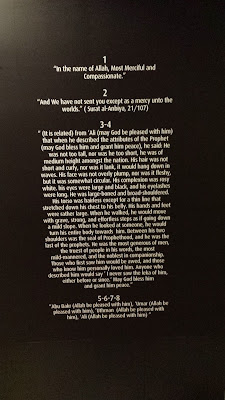 Here's an example of the "typical" type: 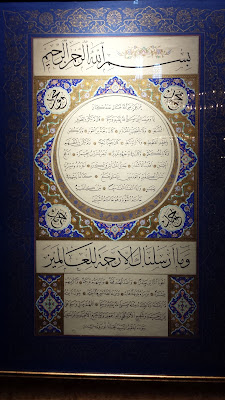 The far more interesting pieces (in my view) were the ones which broke the traditional mold (surprise!) and abandoned the simple framing in favor of more unexpected forms and shapes, such as these: 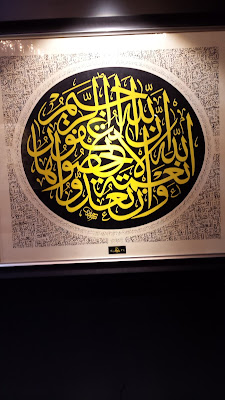 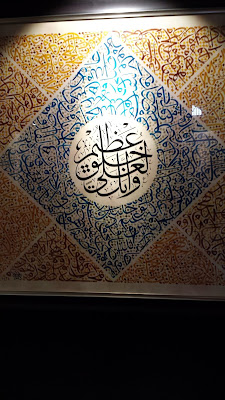 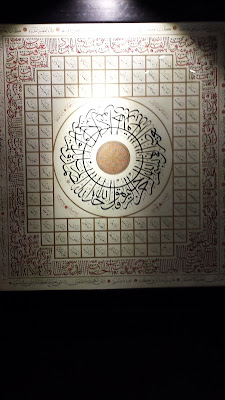 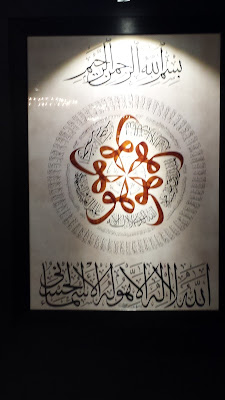 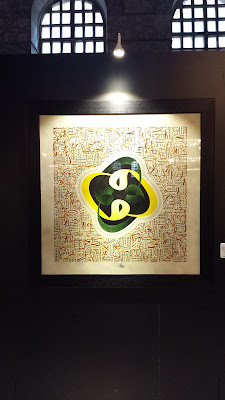