Three days in Athens is definitely not enough and now Rome has a competitor for the title of my favorite city in Europe. Many more pictures of all sorts HERE and HERE! 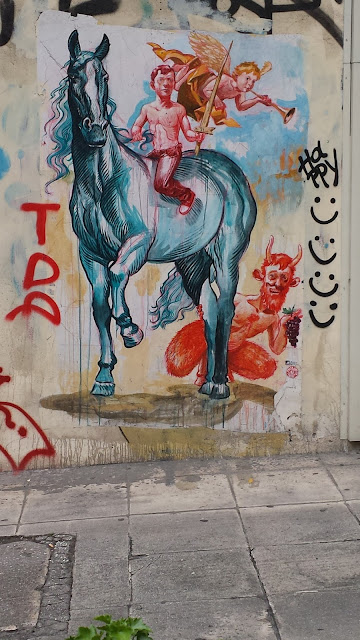 From the second we arrived it was like coming home. Great food! Smiling faces! Perfect weather! Wow! After getting up early for our flight out of Ataturk airport (the unpleasantness of which has already been documented) we navigated the airport, Greek customs and the trains easily (except they didn't seem to have a SIM card vendor for our phones like every other airport) and got to Hotel Attalos, which we highly recommend. Great rates, wonderful view of the Acropolis from the rooftop bar, great friendly and helpful staff; truly superb accommodations.

We took a walk around the neighborhood and had some lunch. It's an interesting place. I've never seen so much graffiti outside NYC in the 80's. Some of it was amazing, some not so much, as art tends to be. I recall thinking that I would stop supporting graffiti culture when advertisers stop invading my public spaces with unwanted advertising. Bonus points if the graffiti subverts the advertisers' message.

There are definitely a fair number of homeless people, most of whom seemed to have drug problems from the look of them. They weren't aggressive at all (to me) but it was sad to see. It's such a contradictory place. It's the birthplace of democracy, yet hotbed of anarchist and fascist ideologies. It's full of ancient beauty, yet also a lot of run down, damaged and abandoned buildings, many of which seem to be stores on the street level and squats in the empty apartments above. We overheard a woman talking about witnessing a riot outside her hotel not far away and relating that the staff said "Don't worry, the happens all the time." Yow! There is apparently an anarchist neighborhood in which this woman's hotel was located-outside the tourist sector. "Lookout! There's one now!" 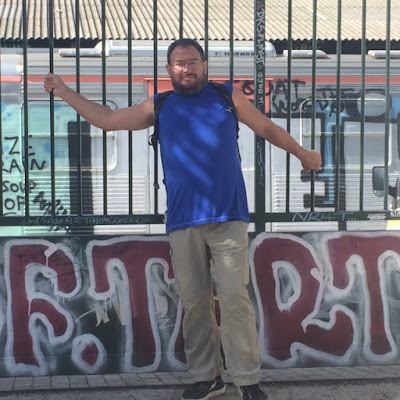 In fact, Athens reminds me a lot of the way NYC used to be before Guiliani and Disney took over, speaking of fascists, and 9/11 turned the city into a police state. It may be true that there are no more aggressive panhandlers (they are now all in jail apparently) but a great deal of the vibrance that was once NYC is gone, replaced by rich people. That vital spark seems very much alive here. 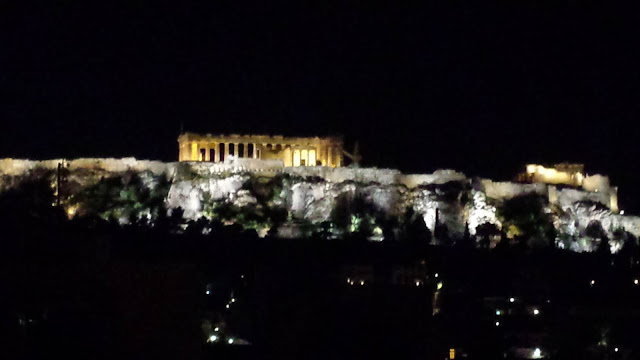 Sitting in the rooftop bar and marveling at the sight of the acropolis on the hill we chanced to meet a couple from NJ (now living in Florida) who had bought tickets for all the local sites as a package, but after the woman sprained her ankle at the Acropolis they couldn't use them, so we got in free to everything but the Acropolis. Sad for them but amazing good luck for us.

As it was LuAnn's birthday we decided to have a nice fish dinner but the place the waitress recommended was closed. Next we tried Trip Advisor but their suggestion was not at the published address and let me just say that they really ought to fix that. We have found that at least 50% of the time their locations are not only wrong, but spectacularly wrong; like nowhere near where they are supposed to be. Surely they could try to mitigate that? Thus we jumped in a cab and I asked Kostas, the driver, "If you were taking your wife out for seafood where would you go?" and he took us to Zorba's in Piraeus, which despite the silly name (Zorba the Greeks? Really?) it was delicious, if rather pricey. Here's the view: 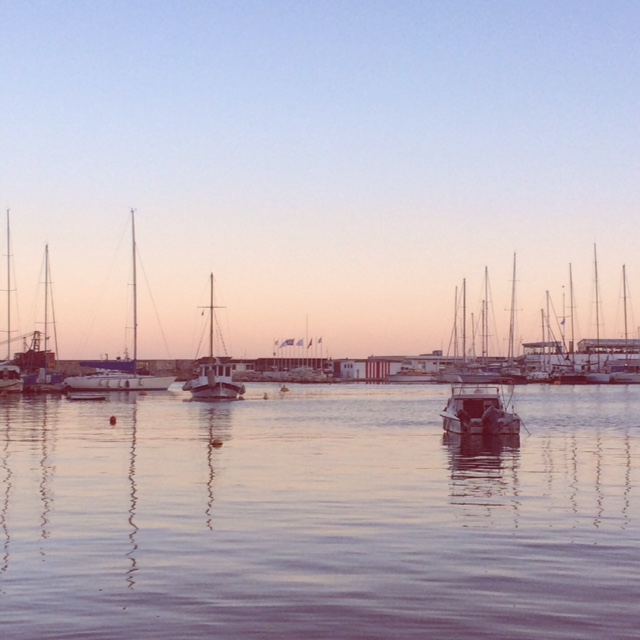 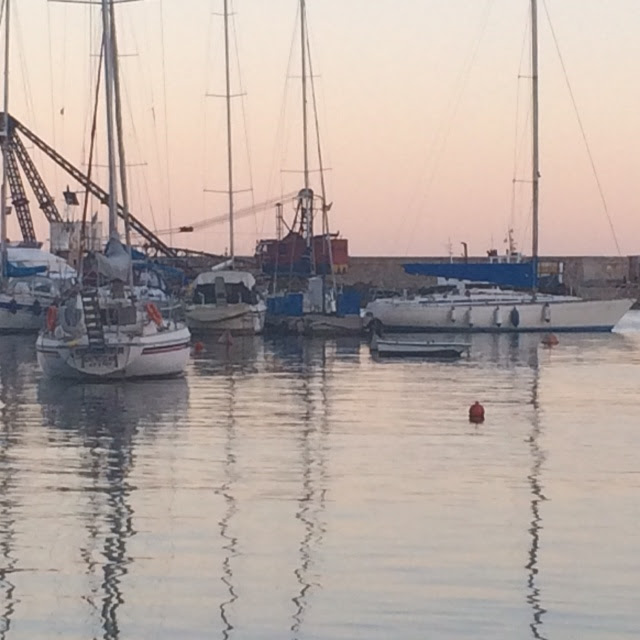 Next day we walked past Hadrian's Library and through the Roman Agora Wow. 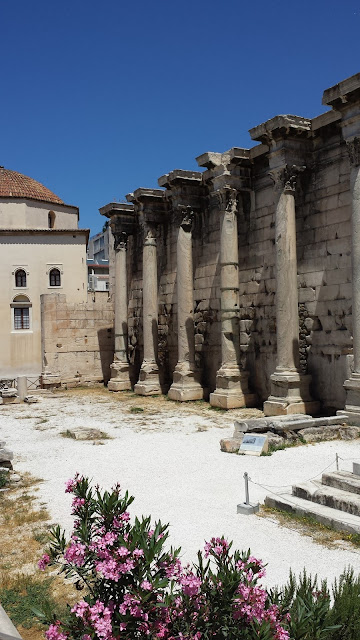 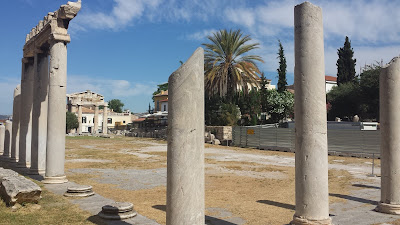 Big deal you may say, old rocks and columns, but seriously the stuff that went on here is worth reading about. Heavy history. Next we strolled up the hill to the Acropolis and it was even more breathtaking than it looks in pictures. Many of it's more delicate parts have been moved to the museum for cleaning and restoration and the replacement casts maintain the effect. 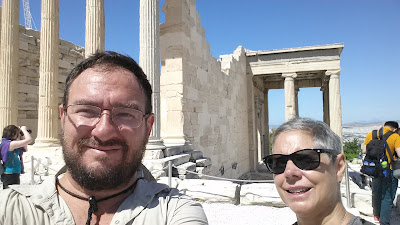 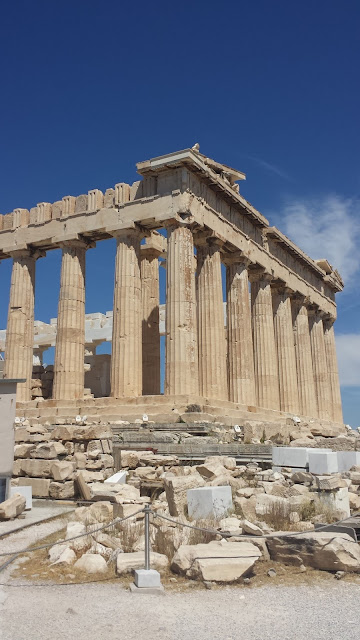 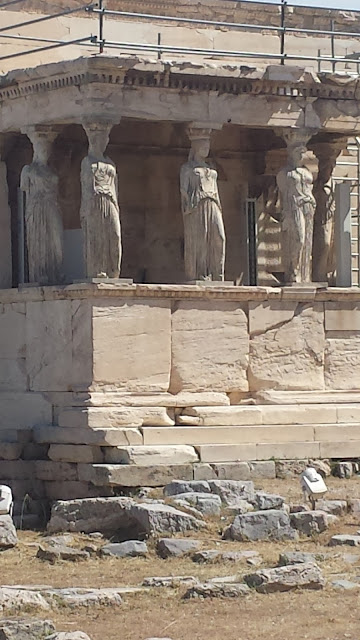 After exploring the old place thoroughly, including the North and South slopes, we wandered down into town bumped into the SIM card salesman, got our phones working and had a tremendous lunch at one of the many cafes. Really, the food has been wonderful. Nearly every bite we've had in this country can only be described as "sublime". Everything is so fresh and delicious! Maybe its magnified because we were so over the food in Asia, Japan notwithstanding of course. Then there's the beautiful scenery: 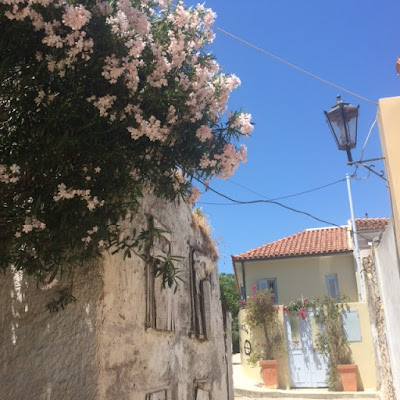 Next up we made our way to the Ancient Agora Museum, yet another site full of stunning relics and artifacts from 1500-2500 years ago. Here's a Spartan shield, captured by the Athenians at the battle of Pylos 425 BC with poetry by Tyrtaeus carved in it. 2400 years ago a real man carried this thing into battle, possibly to his death, and now I can look at it and...what? Be awed? Yawn and walk by? It's hard not to be overwhelmed by it all. 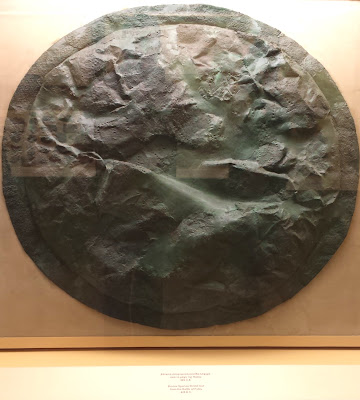 Moving on we walked up to the temple of Atlas and strolled around taking in the views. You often see these strange sorts of repairs, temporary interventions trying to hold these thousand year old buildings together. They've had so many different cultures invade, turn the temples into Christian or Muslim temples and back again. Knock out a pice of wall for a door, brick it up, whatever. Crazy. 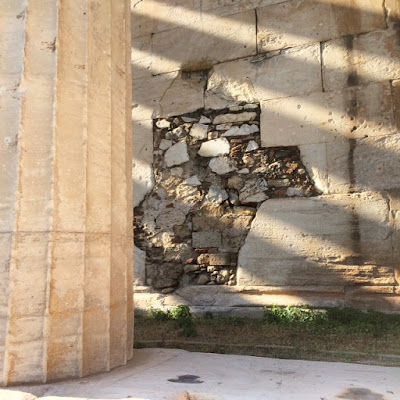 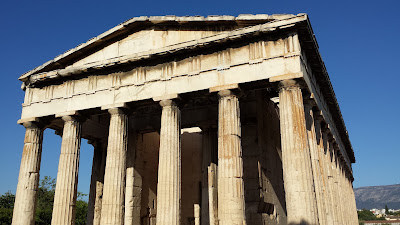 After such an amazingly full day we had dinner at a cool little place by the border of the Agora and headed back to the hotel and slept soundly. Next morning we had our coffee at the local and got to the Keramikos museum, which has quite a collection of funerary art and sculpture, tombs and such as well as a big outdoor section where the potters worked creating what we now call "ceramics". There's also some great views of the surrounding area, including this Orthodox church: 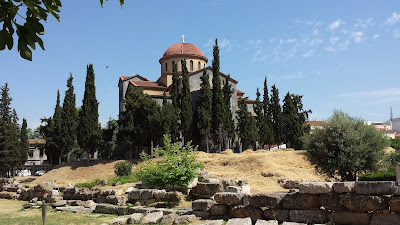 As the day got hot we headed to the Museum of the Acropolis, where all the artifacts and being stored, restored and displayed. They've won all sorts of awards for the groundbreaking work they are doing (pardon the pun) while still keeping it accessible to the public. Some of the things that have happened to this priceless historical treasure are beyond belief.

That the Turks would store ammo there to be blown to bits by the Venetians or that the British minister in 1801, Thomas Bruce, Lord of Elgin, bribed the Turks to let him just loot the place for the so-called "Elgin marbles" is beyond shameful. WTF? Fortunately these guys are doing a great job and it was a wonderfully fun and informative place. They even have archeologists to answer questions and all sorts of cool new research on how all these statues and temples were painted.

The day clouded up and we passed through Hadrian's Arch here: 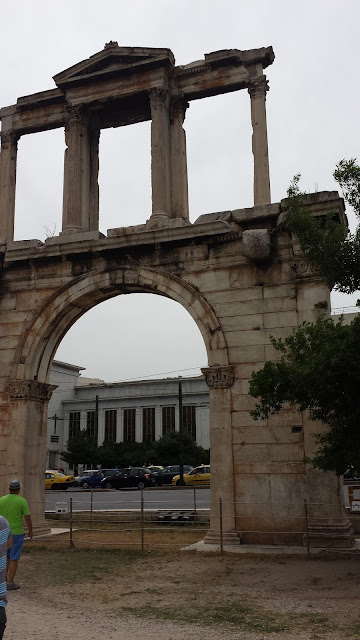 We were on our way to visit the Temple of Olympian Zeus, which is now really just a bunch of HUGE Corinthian columns in a field but it was still interesting to see and read about. It's really surprising that any of this stuff is still around at all considering the amount of invasions, occupation, pillaging and general higgledy-piggledy this place has gone through since forever. 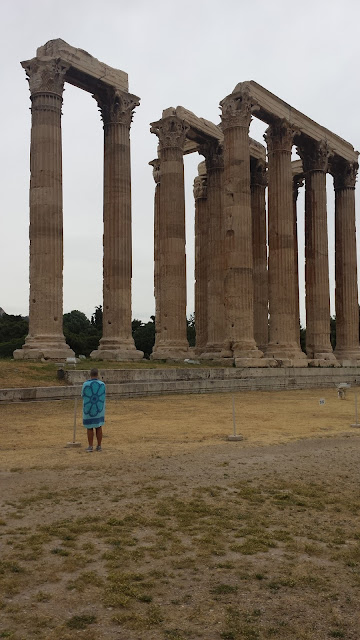 Once again we had a great dinner. We try to find places full of Greeks (or whatever the locals are) and bonus points if the menu isn't in English and/or the guy just tells you what to order. "Tonight we have baby lamb chops. Delicious!" or "Fresh small fish, fried. Two hours ago they were swimming." Yes. Please. Bring me that. And some of the local beer or wine. Gotta be ready for the next day when we must to get up stupid early to catch the train to Meteora, the Monasteries in the Sky.