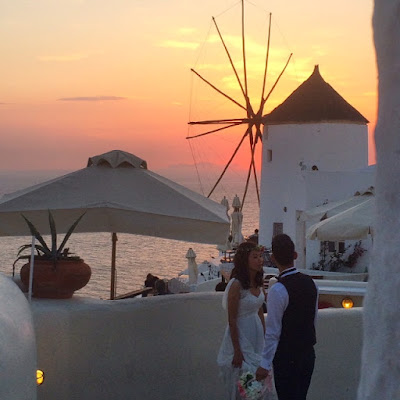 After our 3 days of downtime in Syros where we mostly caught up on blogging and beaching we were ready. We had been anxiously awaiting our 2 weeks in Santorini. This is one place we had planned for quite a bit in advance. We had hoped to meet up with our daughter Alexa there but her life got in the way. She's moving from Philly to LA! That was a huge disappointment, especially for LuAnn, so she asked her lifelong friend Jan if she wanted to meet us and we were tickled when she said yes! Yay, Jan! Also, Andy's sister Rose decided to meet us there too. Woot! 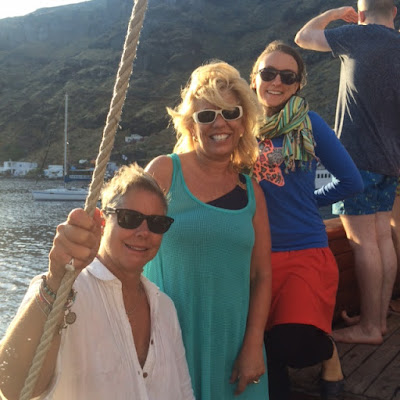 First let me say, you know when you see pictures of a place, but when you get there, you are a bit disappointed because it just doesn't live up to all the hype? Yeah, Santorini is NOT that place. It was as breathtaking as all the photos we've seen. Its hard to even put into words how beautiful a place it is. Santorini is the name of the whole island-there are many small villages on the island, and 2 larger ones- Oia and Fira. We stayed just outside of Oia-this is the village you often see the iconic photo of with the blue domed church against the cobalt blue Aegean Sea. There was barely a cloud in the sky the entire time we were there, and the sunsets which Oia is famous for were amazing. They would turn all the bright whitewashed buildings a pale pink. 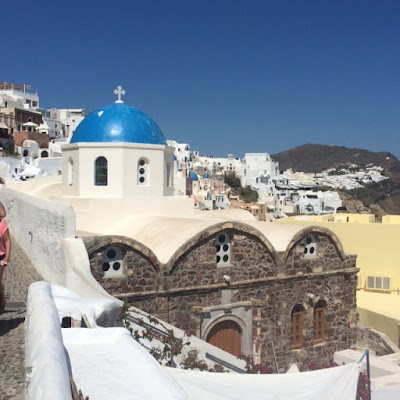 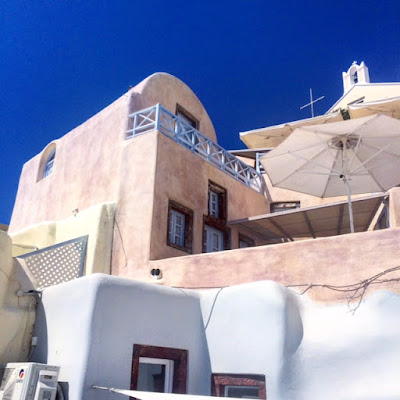 Here's the caldera of the volcano in the center: 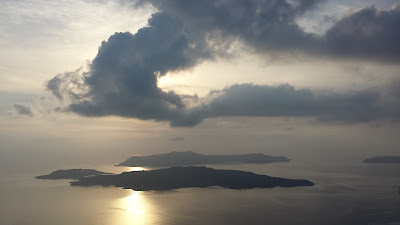 Santorini is a volcanic island. If you look at it on a map, you will see the shape indicates it was once round. Now the middle of that long ago volcano is full of water and the island is sort of crescent shaped. This explains its unusual geography. The "caldera" side has all the high-end luxury cave hotels going down the cliffs, while the Aegean side is flatter to the ocean (and less expensive places to stay!). We stayed on the flatter side, at Maria's Place, which was really one of the most enjoyable stays we've had. Anna and Kostas, the proprietors, were lovely people, and our room had a terrace overlooking the pool and sea. 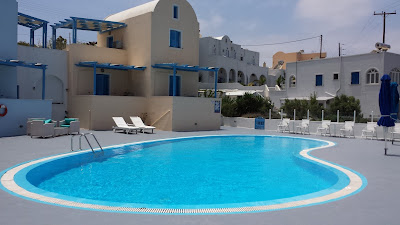 It is definitely a "touristy" place. If it has a downfall, that would be it. Obviously because of all its charms, people want to see it! So you do have to deal with all the tour buses, cruise ships in port, and the higher prices throughout that all that brings, but it was so worth it!

Good God, those two weeks went by like a shot. We had a couple of days before everyone arrived and something about the gorgeous setting inspired Andy to record a couple of song demos, thus justifying dragging all that recording gear around. LuAnn was inspired to paint more than once right from our terrace. One day we decided to take the walking path between Oia and Fira, which proved to be much more challenging than we anticipated. Seven miles uphill and downhill under a relentless sun. But the views were crazy, so we'd have to say it was worth it although as we were walking we asked each other several times whose idea this was! We paused at the top so Andy could spell out our portmanteau in white volcanic pebbles: 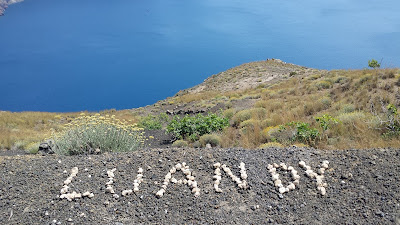 When Jan arrived a few days later however, we were ready to go out and explore. One thing we hadn't counted on was Jan's fear of heights...uh-oh, bad place to have that. But the first day we walked down the 280 steps from Oia to the Ammoudi Bay, and Jan conquered that fear by holding tight to Andy's arm. We had an awesome fish lunch by selecting our fish right from todays catch, and maybe had a couple liters of that Greek wine. Then we had a hilariously fun ride back up the steps on the backs of the donkeys! That donkey ride was repeated several more times once Rose arrived also, since it was always a blast. 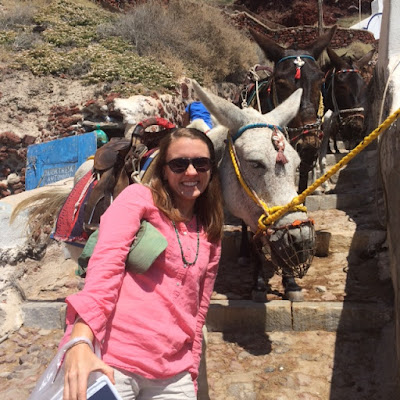 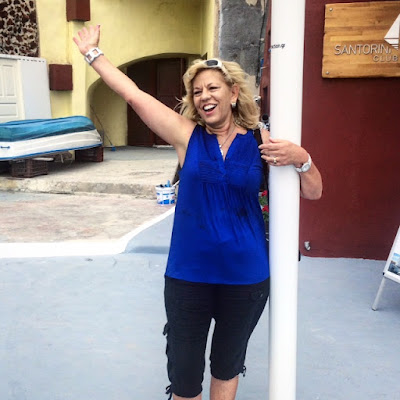 We rented the cutest little powder blue, drop-top Fiat one day and drove all over the island, visiting the black and red beaches. Once Rose arrived, we booked a brigantine sailboat ride to the volcano, nearby hot springs, the nearby island of Therasia and then on Oia Bay for the sunset. Included in that trip was a hike to the very top of the volcano, where you could just smell the sulphur. 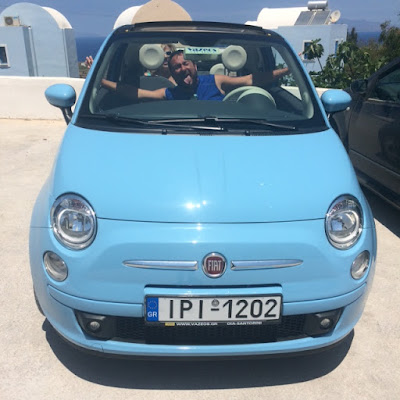 We saw the archeological digs in Akrotiri, and visited the museum in Fira where most of the artifacts found there are stored. This was absolutely amazing since basically its a village dating to 17th century BC, that was perfectly preserved in ash. The pottery, jewelry, and wall paintings prove that decorative art was alive and well even in those times. 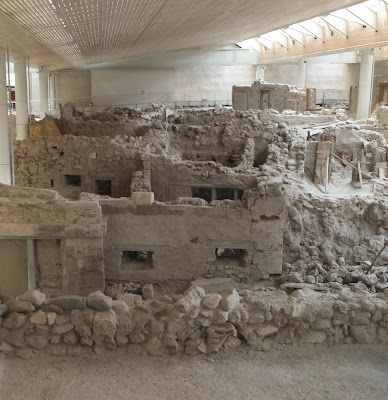 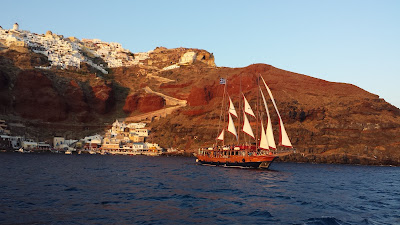 All these activities were filled in of course with time by the pool, shopping with Jan, eating delicious greek food, and drinking delicious greek wines. We found the beaches a bit challenging- the water was cold but so clear! The beaches were rocky, as in small to medium rocks, and even the black beaches were not the fine sand we are used to. And being black, extremely hot! All in all, our time there was really wonderful. We are pretty certain Jan enjoyed it too. By the end of the trip, she was able to ride the local buses without being bothered by the extreme drops and hairpin curves! 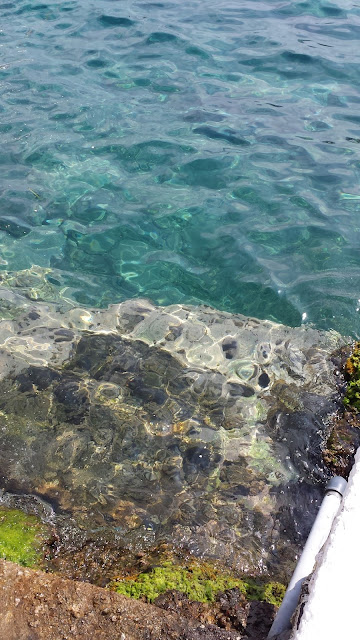 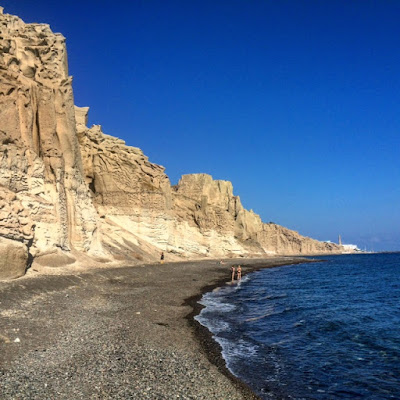 We are still working out tentative plans to return to the US. We've more or less decided on south Florida, namely Del Ray Beach to nest in. There seems to be some opportunity there for both of us. We will see. It all sort of depends on what happens between now and September.