It is difficult to believe that six months ago we we sold out, packed up and lit out for the territory. In honor of this fact, we have compiled some awards to commemorate the highs and lows, winners and losers of our trip thus far. So we are pleased to present to you The Six Month Awards!

Best WTF Moments:
The winner is:
Booking a ferry from Koh Lanta to Krabi, Thailand and finding it required a boat change in the open sea from a large ferry to a small longtail boat (about a 5 foot drop) as the boats slammed together, while carrying our luggage, followed by climbing out and across multiple boats & ladders up to the dock in Ao Nang. Not for the faint of heart or weak of hip! 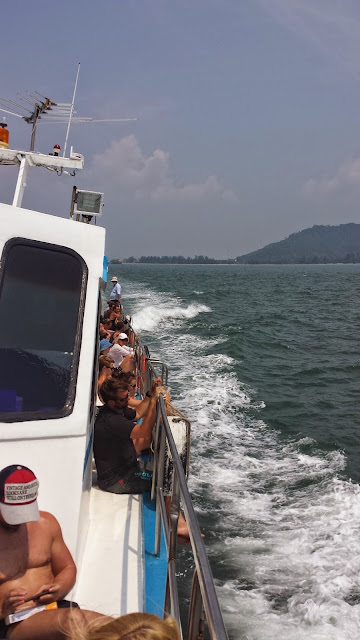 Runner up:
Asking the staff if we could sit at one of the empty cocktail tables at Ku De Ta bar on top of the Marina Bay Sands in Singapore, and being informed there is a "minimum spend " of $3,000 at the tables. What? No. Who WERE those people sitting there anyway? Yeesh. Nobody sensible. 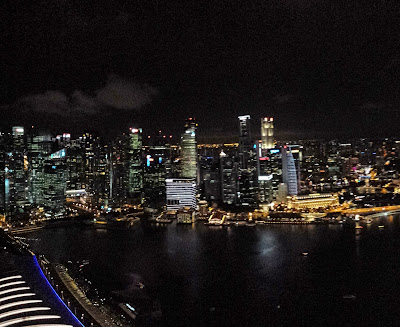 Most Hilarious Moments:
The winner is:
Being so psyched to eat the "Classic Burger" we ordered in Siem Reap, Cambodia after months of no western food, only to discover that although it contained lettuce, tomato, some kind of ham/bacon, sauteed onion, and a roll, it did NOT actually contain a burger. 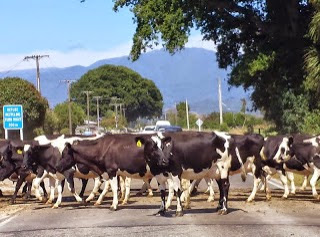 Actually there have been WAY too many pants wetting, can't breathe, hilarious moments to pick a winner, so it's a tie. Good times all around.

Most Sobering Moments:
The winner is:
Visiting the Land Mine Museum in Cambodia 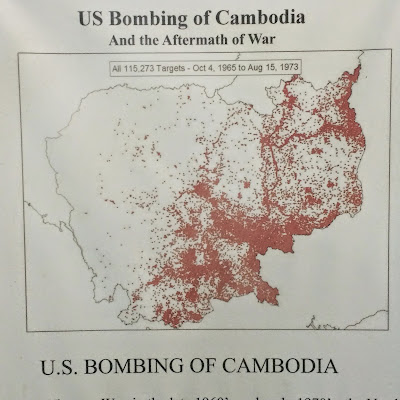 The runner up:
Browsing the displays at the Osaka Castle showing the mass destruction of WWll bombings.

In general seeing the effects of war, poverty and religious extremism of one kind or another has been pretty sobering and frighteningly enlightening the world over. Stop it. Please. Help each other. Be kind. No more killing, pollution and littering, OK? That'd be great. Thanks.

LuAnn: A full-on tearful breakdown, while wading in the Andaman Sea in Southern Thailand, after realizing we booked 21 days in the 104 degree Leaf House Bungalow with no A/C, overlooking a trash pile. "I'd want to go home but I don't even have a home to go home to!" (Note: fixed after canceling and rebooking a far nicer place without too great a loss of face or funds).

Best Meals:
The winner is: Any meal that we were served in Japan. Seriously. 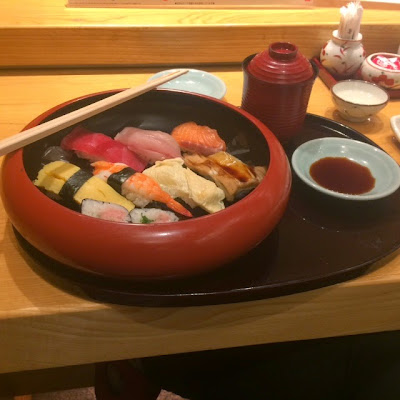 Worst Meals:
The one exception:
The huge mound of tripe & cabbage cooked at our table with a drunk salaryman in Osaka, Japan. We think he was trying to pick one or both of us up. Flattering but pass. 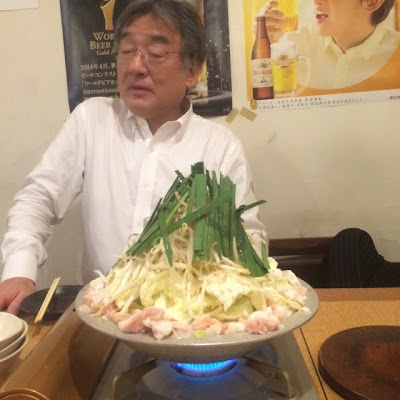 Runner up: a bowl of plain melted cheese LuAnn inadvertently ordered with her bad Spanish in Guanajuato, Mexico while our son Austen looked on in dismay. Not happy, like this: 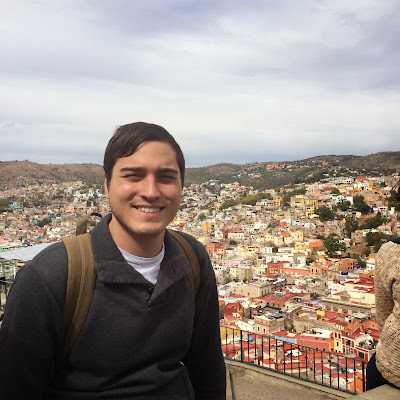 Most Expensive Destination:
The winner is:
Singapore. $83 for a small pizza and 2 beers. The aforementioned $3000 minimum at Marina Bay Sands. Two more beers at the Long Bar at Raffles Hotel? That will be $46, please. Hey, it's where the Singapore Sling was invented! We didn't have one. We were there barely 4 days, and spent $1075 while trying to be "frugal". Yikes. 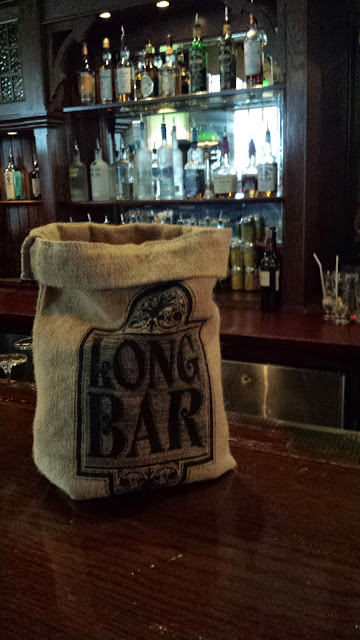 Runner up: New Zealand. Two flat whites and two muffins? $26 please. Yow! Like Japan, though, so worth it.

Least Expensive Destination:
The winner is:
Cambodia. We stayed at the beautiful Rose Royal Boutique luxury resort, with a very attentive staff (almost to the point of lurking) for about $20 a night. We visited the amazing sites at Angkor Wat, and returned to the hotel in the heat of the day to swim in their clean sparkling pool. According to Trail Wallet, the budgeting app we use made by our friends Simon and Erin at Never Ending Voyage (check it out!), our four days there came in at $325. About $40 a day each. 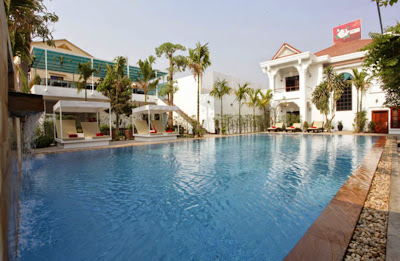 Best Accommodations:
The winner is:
The SkyCity Grand, Auckland, NZ. We had a free 3 night free stay at this 5 star hotel, as a result of a Twitter contest Andy won from Expedia. The room was luxurious, the bed to die for, the restaurants first class, and the city was laid out in front of us to explore easily by foot. Wonderful. And free! 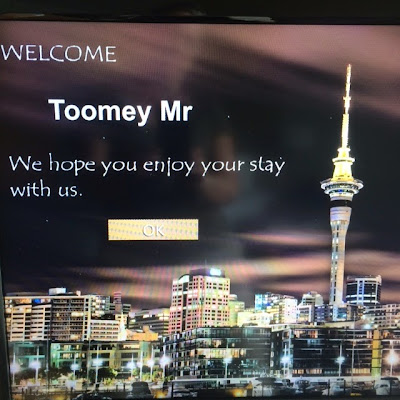 Runner up: The Studios villa in Ubud, Bali. The apartment was large, with a well equipped kitchen, but best of all, the grounds were a tropical paradise full of flowers and butterflies. There was even an amazing temple right in the complex, to say nothing of the infinity pool overlooking the rice fields. Seven nights for $325. 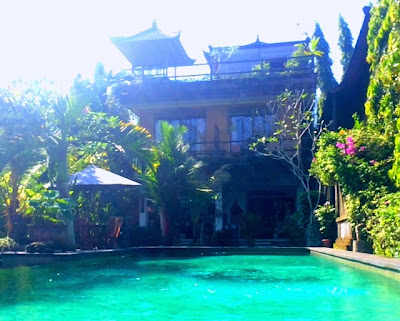 Worst Accommodations:
Since we painfully got out of the aforementioned pit-level bungalows, this would have to go to a really awful guesthouse we spent one night in Ayuttaya, Thailand. We sat on the mattress and it sank to the frame. It was so bad we've blocked out the name. It was one we booked while in the midst of the now infamous tuk-tuk scam in Bankok.

We were going to try to include prettiest and ugliest places, or favorite/least favorite, but honestly it's just too hard. Some of the best places were marred by things that are hard to quantify, like too many rude tourists or too much trash or whatnot, while some of the roughest places were tempered by some of the nicest people or the most amazing sights. Besides, one man's meat is another man's poison. Get out there and see for yourself!

Why?
Why do so many places in the world that are so plagued by mosquitos and other bugs have no screens? Not on the windows, not on the doors: why? It's crazy! Want to make a million dollars? Convince people in Southeast Asia and South America they need screens instead of malaria medicine and you'll be set.

So:
So far so good! We still love it. No regrets, really. Andy recently said to a friend "I often wonder about the wisdom of our decision, but not the virtue." We miss our friends and family but we hope to see them again sooner or later and when we do we hope it will be all the sweeter. Most of all we hope we've inspired someone out there to take the leap. Do that thing you always wanted to do. You can fail doing something you hate too, so you might as well try what you love.
Posted by Andy at 1:28 PM