In The Swing Of Singapore

The cold I was fighting finally hit on our last day in Ubud, Bali so there was nothing to report except sneezing and hate. The next day was a travel day and it was tough getting up at 5:30AM but we got through the 2 hour flight from Bali to Singapore without incident and the customs in Singapore was a breeze. A $20 cab ride got us to the brand new Park Alexandra Hotel in about 20 minutes.

Turns out the hotel opened...that day. Wow! A month ago Expedia sold me a room in a hotel that wasn't even open yet! I heard the staff saying the "official" opening is in August. We are among the first 20 guinea pigs. Hilarious! The card keys were a major pain since you need them to work the elevators, and I estimate that each of the 6 cards we've been issued works approximately 25% of the time. Its just a brand spanking new hotel with some bugs to work out. There is a pretty infinity pool on the 7th floor though, overlooking some of Singapore's super modern buildings. 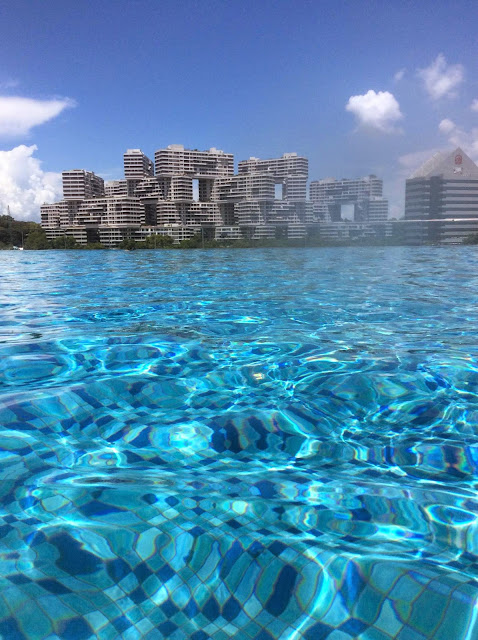 We dropped our stuff and took my cold out sightseeing. We had a quick fried chicken lunch at the food stalls nearby, where they display their grade from the regular food inspections. What a change from other food vendors we've seen throughout Southeast Asia! Mostly B's. We ate at an A, wouldn't you? Seems Singapore is totally unforgiving of unclean conditions, which was comforting.  After lunch. we caught the free shuttle to Bayfront, walked down to the famous Gardens By The Bay just in time for this awesome light show! This is 30 seconds of the 20 minute piece, including theme from 2001, Star Wars, and I don't even know what all. I recognized most of the tunes but can't recall them here.

We walked back to the iconic Marina Bay Sands and got the elevator up to the fabulous Ku De Ta bar on the theory that instead of paying $23 each for tickets to the observation deck we could get the same view plus 2 drinks! And that's exactly what they were. One Tiger beer and one house white wine: $50 (including tax and tip). Jesus. Here's the view from the outside: 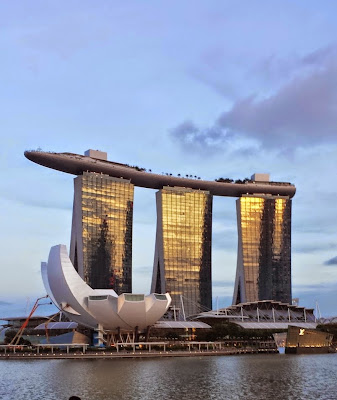 We were in the right hand tower, top floor. When we went to get a table (as opposed to the stand up bar tables) they guy said "See the woman at the door." who informed me the minimum "spend" to sit at those tables was....$3000. HAHAHAHAHA! Right. Who WERE those people sitting there anyway? About 15 people were hanging out there, say 5 groups of three. Why did they think that was worthwhile? Weird. Three Chinese businessmen, a bunch of 20-somethings... I just don't get it.
Next up a fantastic dinner at Chinatown, then home for the night. 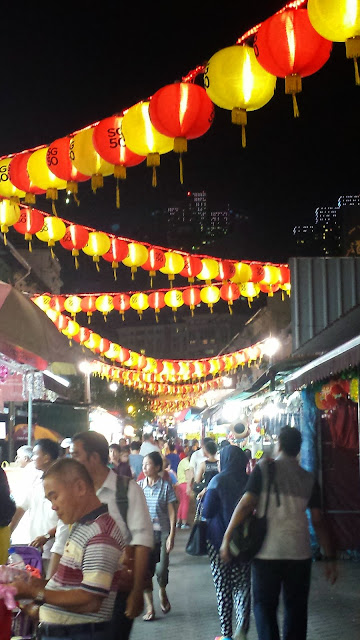 I woke up feeling much better the next day, so we hit the Singapore Botanical Gardens. Stunning! They much deserve their reputation and I hear UNESCO is adding them to the World Heritage Sites soon. We walked about ten miles that day between one thing and another. Too many pix to pick: 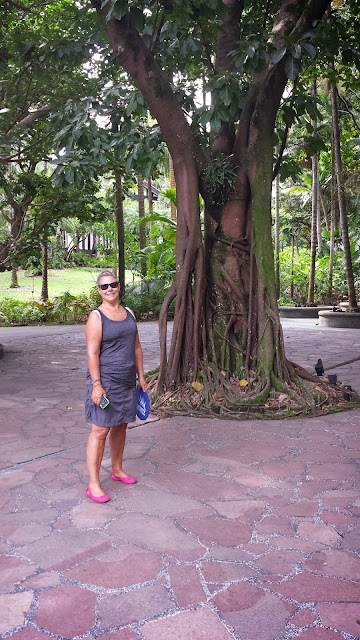 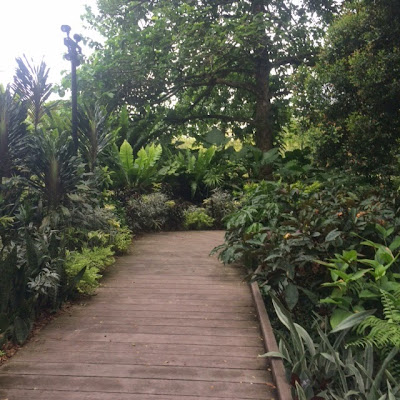 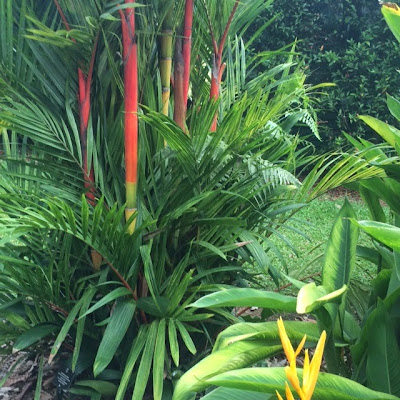 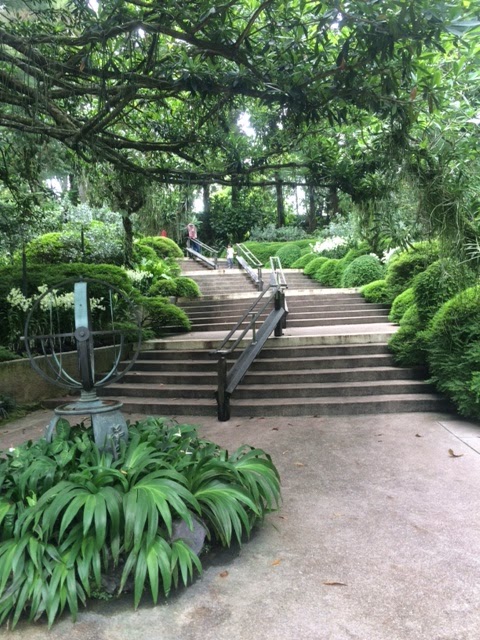 Afterwards we got the bus down the fashion mecca of Orchard Road to the Raffles Hotel, home of the Singapore Sling. Perhaps it's not politically correct of fashionable to be nostalgic for colonial times, but I am occasionally anyway. Not for the awful parts of course, but for the elegance, grace and style it once had, or at least projected. 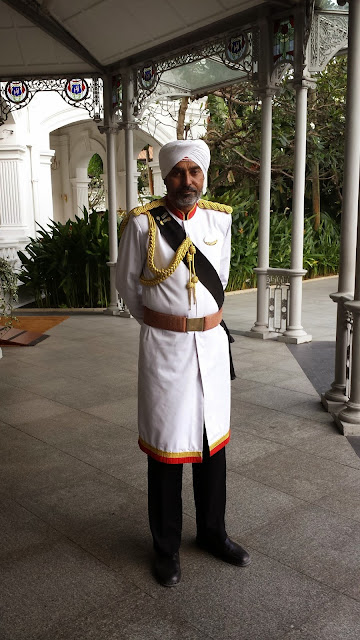 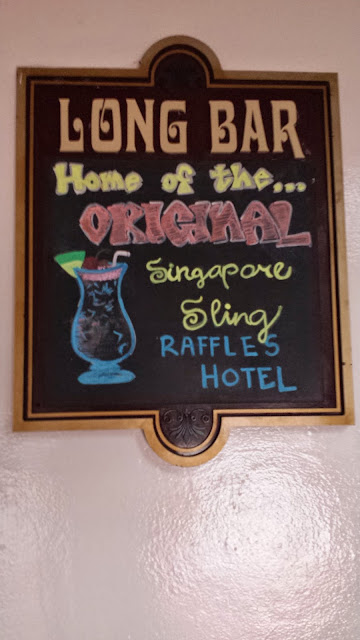 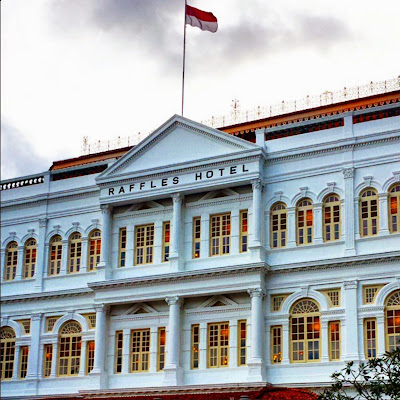 We walked back to the esplanade for dinner, then across the esplanade bridge at the mouth of the Singapore river to the Merlion statue, then cut through the Fullerton hotel and ran into something we saw a lot in Singapore. Following signs to the MRT subway station we ended up outside and...nothing. No indication where to go. It was like 3 blocks away. That type of thing happened to us a lot. You follow signs to the outside and then they just assume you know where to go. Strange. 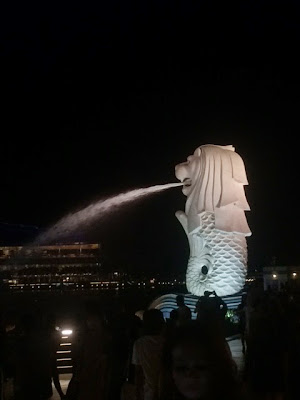 The next day after brunch at the hotel we decided to lay low since LuAnn wasn't feeling well so we hung by the pool and met a young woman from Hong Kong, a kindred spirit with whom we had a nice chat about the state of the world. Then we headed off to see the Flower Dome and Cloud Forest Dome at Gardens by the Bay. They were both great but could have been better lit, as we were there in the evening and some of the exhibits weren't easy to see. 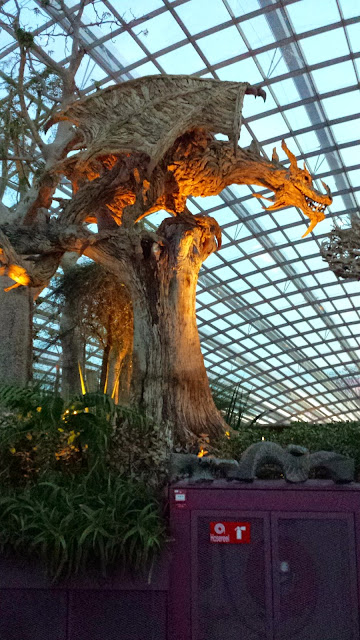 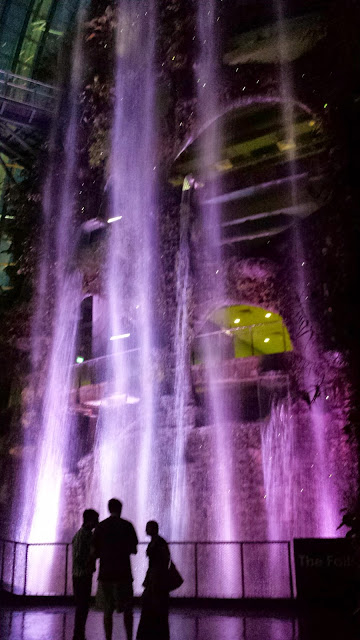 Our flight the next day was 8PM but we decided to spend the day at the Singapore airport. Yes, that's right, on purpose. That tells you how cool the Changi Airport is. The had everything; pool, free video games, movies, flower gardens galore. There was even a sports bar dedicated to Boston sports teams. Amazing, if somewhat out of place. They had things like license plates from Illinois and Pennsylvania as well and the manager was surprised when I told him those places were nowhere near Boston. The things you see.

For more Swinging pix of Singapore click HERE and HERE!

Some observations on Singapore: We loved that it was spotlessly clean, and efficient. We loved that there seemed to be no homeless people, beggars, thieves, scammers or slums that we saw and that the state takes care of its people with things like subsidized housing and medicine. No one seemed to have a single complaint, other than that it was expensive.

We are a bit troubled that the state clearly has so much power. People obey the law because the punishments are HARSH and the police we saw very obviously had NO sense of humor at all. They looked like they would happily mess you up just for practice. Andy absolutely loved the hot humid weather, LuAnn less so.

Next up: Special 6 months on the road edition and Istanbul Turkey!
Posted by Andy at 10:30 AM