Hello again! Sorry it's been so long since our last post, but we've been busy! 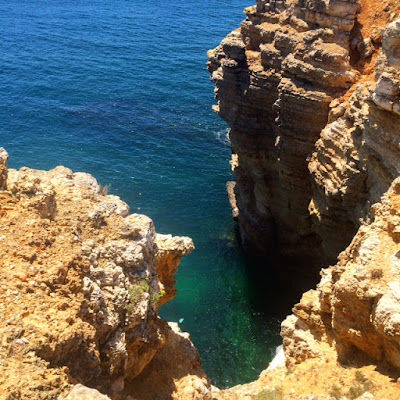 Lagos is a lovely place situated in Southern Portugal in the region called the Algarve, from the Arabic "Al-Gharb", meaning "The West". It was so-named back when the Arabs ran this part of the Iberian peninsula. Not to be confused with Lagos, Nigeria! 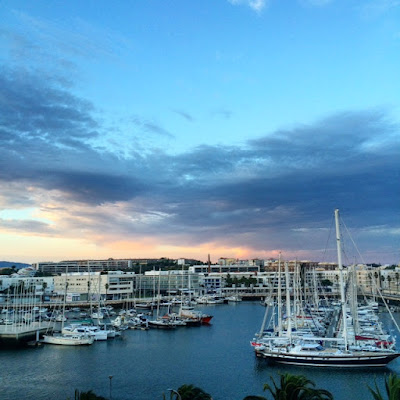 We had a lovely bus trip here from Lisbon and arrived without incident. Our apartment is quite close to the bus station, so that was convenient. One of the first things that happened is I came down with a minor head cold so that was sort of a drag; just in time for the beach, too! Drat. It wasn't too bad though. Here's me suffering in front of our apartment building: 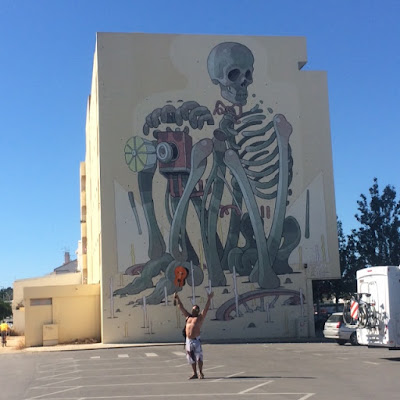 Some funny items: the property manager couldn't meet us so her friend that lives in the same building came & gave us the keys and such. The apartment had some very odd decorating choices. I can only describe it as "50's kitsch".  No fan or A/C but it's SUPER windy so leaving the windows open results in anything that's not nailed down ending up on the floor. We only had one really calm night and only one or two mosquitos troubled us (again, no screens). The TV is hung on the wall in such a way that you can only watch it if you are sitting in the kitchen sink, so that's kind of dumb.

The apartment itself has windows all around like a greenhouse, but there are no blinds or shades so the sun is quite strong in the morning and evening. In fact, we wear sunglasses to eat dinner if we cook here. The mini fridge would only stay shut with a chair pressed against it as the hinge springs were somehow messed up. The landlord doesn't live in Portugal and the property manager didn't really seem to care but fortunately we don't freak out about trivial things like that. We laugh. Mostly. 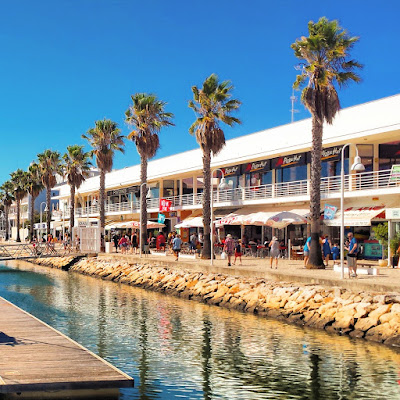 We rented a scooter for the weekend and although I was too far under the weather on Saturday, Sunday we drove out to Sagres, at Cabo Sao Vicente, the South-Western most point in Europe. The lighthouse there had some amazing views of the rugged coast line. We had lunch at a cute little bistro in town but afterward the weather suddenly turned. It had been windy, but now it was cloudy, cold and quite misty so instead of hanging around and checking out the fort there we hit the road. 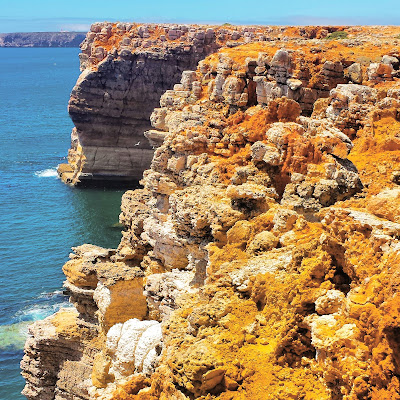 I (again) made the mistake of getting the cheap 50cc scooter, who's top speed was about 70 KPH (that's 43 MPH) and even slower uphill with the two of us. That made the highway pretty challenging. It was a two lane blacktop, but people were going quite fast so there was a lot of people passing, blowing us around and generally making me a bit nuts. LuAnn commented when we got home that she felt like we just rode a lawnmower for 70 miles. Mental note: get the bigger bike. 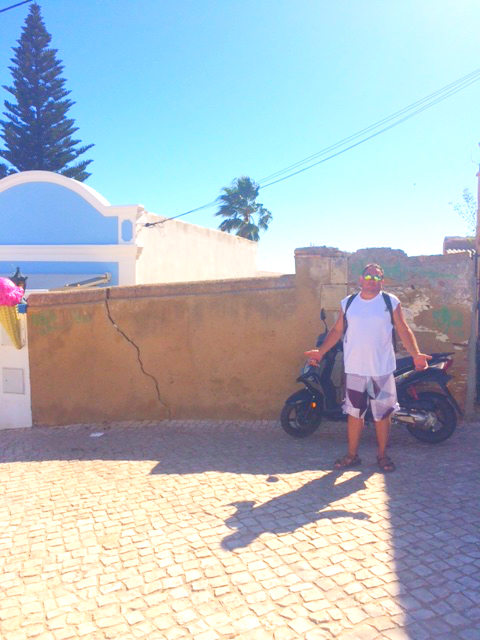 On the way back we stopped at Luz, another little town along the way, and went briefly to the beach there but as I wasn't feeling all that well we didn't really hang around. I wanted to get closer to home before we got wet, so instead we went to Praia de D. Ana, another beach with the crazy rock formations. 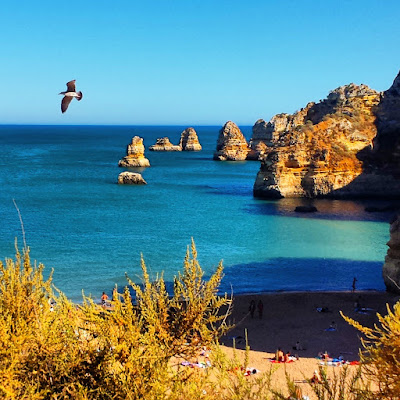 That night we caught a local band at the bar/restaurant across the marina bridge and they were quite friendly guys and really good singers and players too, so that was fun. They covered a lot of the same songs I hear bands covering in the states.

All in all we spent a good deal of time just chilling in the apartment or on the beach. We walked around the cute little town. There are a LOT of tourists here, especially Brits so that's sort of different. This place is really quite similar to "home" in that it could be any beach town anywhere in the states. There are some notable exceptions though. For one no one cares if your dog is on the beach. No one cares if you smoke or drink beer or whatnot. In other words it's ACTUALLY free, unlike places that like to CLAIM to be free but are really authoritarian nightmares. I'm not naming any names. I'm just saying... here we are enjoying our freedom. 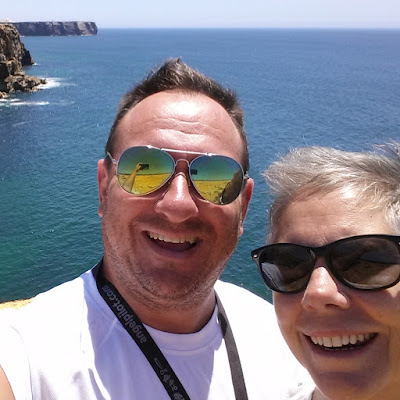 Here's an amusing case in point. LuAnn has been courting a job back in the states and getting through the phone interview process despite the challenges that international calling present, such as time differences and the ridiculous pain that "voice" calls are. Hello? Skype? Facetime? Anyway, things went so well they said "OK! Next step is to get your drug test. You have 48 hours." Uh...drugs are decriminalized in Portugal. It's not actually POSSIBLE to get a drug test unless it's for performance enhancing drugs for pro athletes. Marijuana testing? Yeah, that's not a thing here, sorry. So that was pretty weird. Fortunately they let her put it of until she returns to the US. 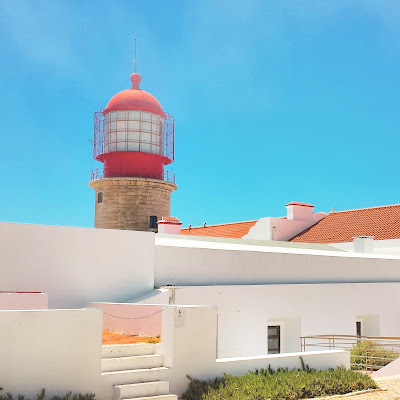 Finally we got the bus back to Lisbon the night before our flight to London and stayed at the VIP Artes Hotel there. We had to get our room changed because, although all rooms are supposed to be non-smoking, the one we got had definitely ben smoked in. Fortunately the replacement was fine. The next day we managed to get down to the Oceanarium (what we yanks would call an aquarium) and although it was rather crowded the exhibits were wonderful. The permanent collection was built around a giant center tank full of sharks, eels, rays and big fish of all kinds, with exhibits on the outside of the tank covering things like penguins, all manner of shellfish and different environments like reefs and such. Beautiful! 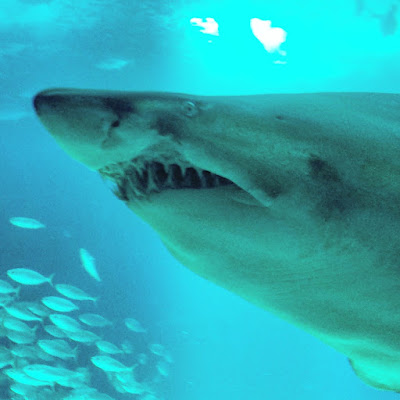 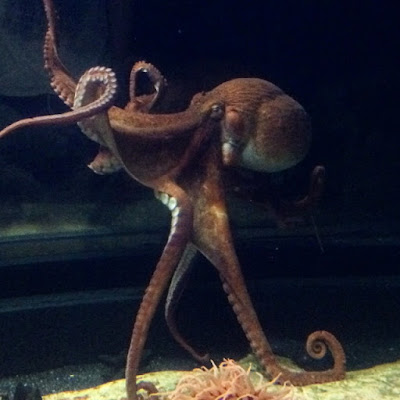 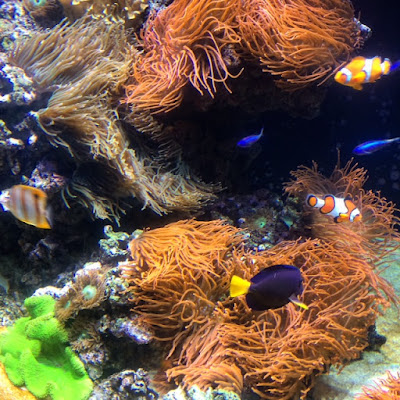 They also had the world's largest free standing aquarium created by Japanese photographer and artist Takashi Amano. It's a shockingly beautiful 160 meter thing covering 3 sides of a huge room filled with a living freshwater aqua system with plants, rocks, and fish of all kinds. Photos don't do it justice. Check out the link as he is a fascinating individual. 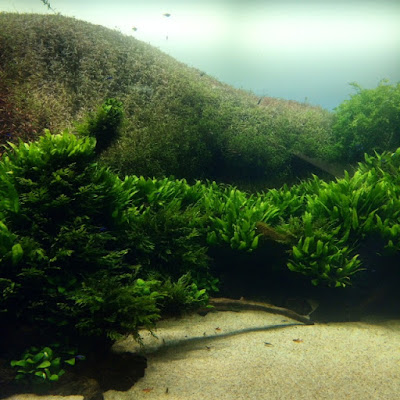 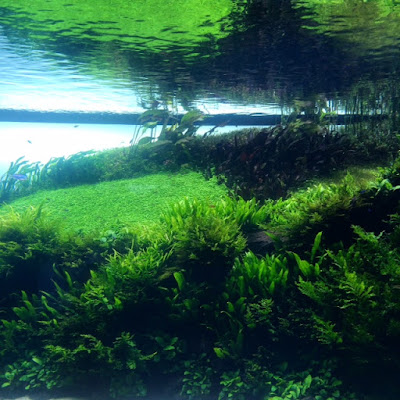 Both parts of the aquarium really deserve their own post but there isn't time just now. Maybe we'll start doing throwback posts as time permits. See you all in a bit when we post on our trip to London and the English countryside!
Posted by Andy at 7:36 AM