Milan! Been wanting to visit here since our honeymoon in Italy some years back! Il Duomo! 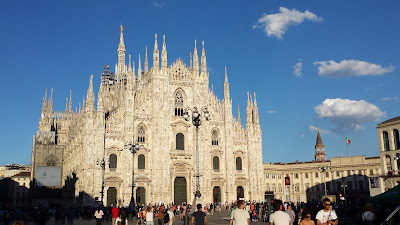 BTW, in case you are new here, we also have a Facebook page and many more pix on LuAnn & Andy's Instagrams, so please check those out, follow along, share, etc? Thanks!

So EZJet cancelled our flight to Milan on very short notice and with a weak explanation, but we got train tickets for less, didn't have to pay an extra 80 euros for luggage and still only took a couple of hours. Yay! We arrived in Milan, got a cab to nearby Hotel Venini. Good location but ugh, two double beds pushed together do not a queen bed make; very bad bedding. Boo! We trotted over to the Sforza Castle where we heard a live orchestra outside playing classical music, and saw tons of swords, armor and guns, plus a lot of sculpture. 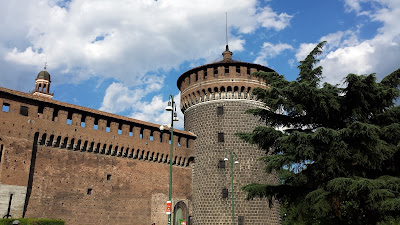 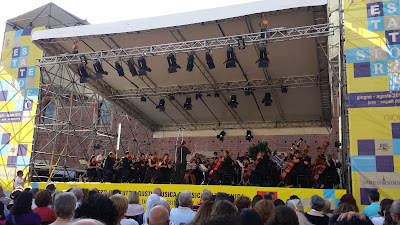 The exhibits closed before we could see it all so we ambled down to Milan's famous cathedral, Il Duomo, strolled around the piece of art and architecture that is Galleria Vittorio Emmanuel I, one of the oldest and most exclusive shopping malls in the world, got some dinner and explored the neighborhood around there. 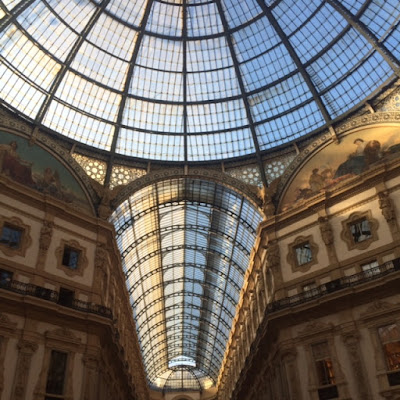 Leonardo Da Vinci gave us the stink eye as we passed. 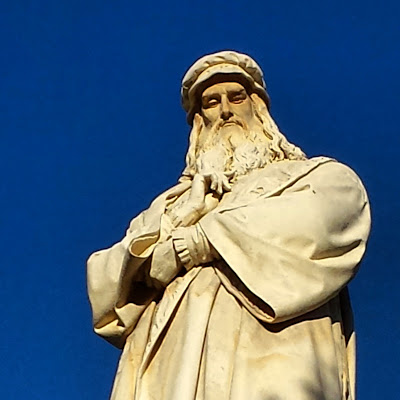 By now it was dark, and they were projecting graphics on the museum building next to the Duomo with music and text about the history of Milan. After that we headed home; all in all a pretty quiet travel day.

Since we hate guided tours and following the guy with the red umbrella, the next day we rented a bitchin Volvo V40 which I nicknamed the Silver Streak and we headed out to Lake Como and Bellagio. This was a major reason we decided to come to Milan; to see some of the lakes region. 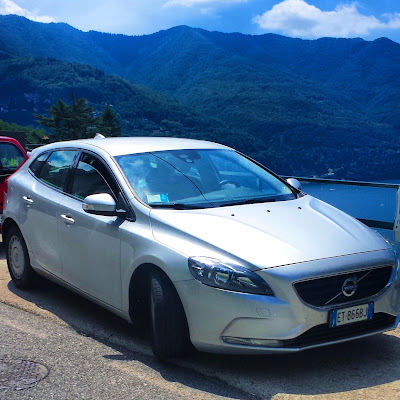 We had some fun driving around the mountains there. It was not for the faint of heart. After not driving for so long it was kind of a hoot, actually. We got some picnic stuff at a local market, got to Bellagio and had to park, which was tough, it being Sunday afternoon. 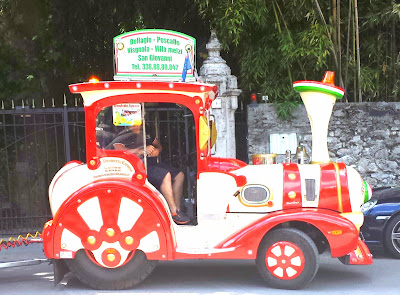 We had our picnic and took the entirely silly looking and undignified shuttle train into and around Bellagio proper where we then strolled through town and booked a small boat tour, which was also super fun. We saw the villa of Richard Branson, but LuAnn was a bit disappointed to hear that George Clooney's was too far south on the lake to see. 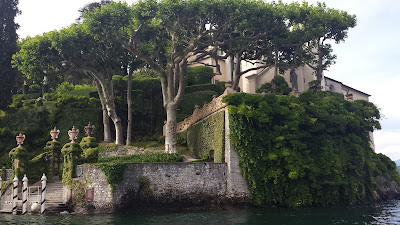 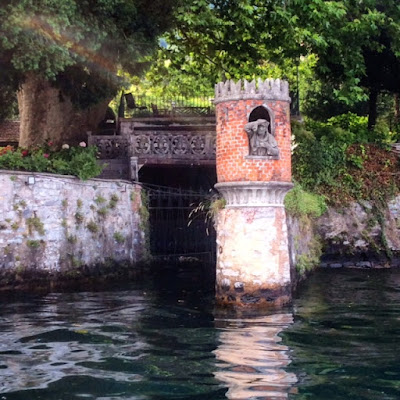 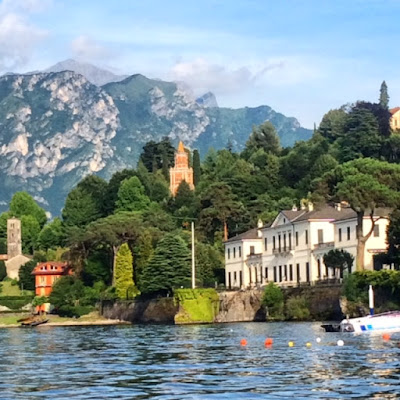 When we got back we figured out we missed the last train so we had to walk back to the distant parking lot where we were forced to leave the car. I left LuAnn to sit on a bench and jogged back where I met two drunk tourists from Seattle desperate for a ride, so I gave them a lift back into town, and we headed back towards Milan. Stopping in Lake Como we had a nice dinner al fresco while we watched a big band there play the last night of a swing festival called Swing Crush. Let me tell you, we saw lots of jitter-bugging & West Coast triple-step but nobody there was East Coast rock-stepping. Nevertheless American swing is alive in Italy! The sunset was fabulous. Driving back to Milan in the dark not so much. 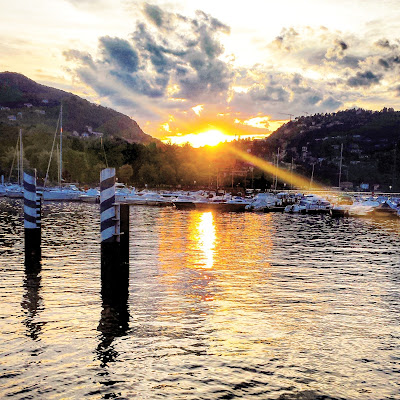 The next day I returned the car and managed to get a haircut at a Chinese hair salon where they all spoke fluent Italian; only 10 euro! We went down and bought tickets for the Duomo, the roof, the museum and archeological site and I immediately lost the tickets once inside. I talked our way onto the roof but really,  never give me anything to hold. Apparently they were in the pocket with my phone and pulling it in and out to take pix, I must have dropped them. Guh. 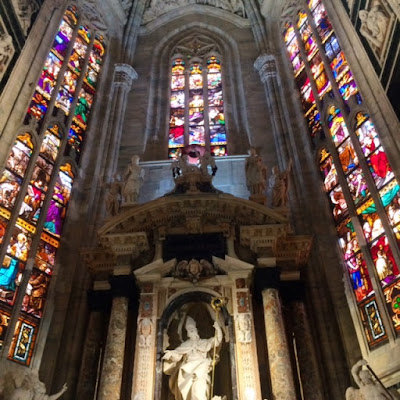 The views from the roof were stunning, as well as seeing a good bit of the 3000 statues adorning the cathedral. 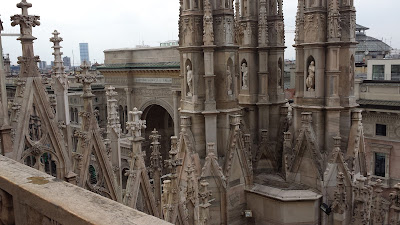 We took advantage of an unusual custom they have here in Milan, the appertivo menu, which is like an all-you-can-eat buffet deal where you buy a drink and the food is free. Bargain! It was yummy, too! That night we went to Cafe Nerino and I can't say enough great things about it. The line is out the door and reservations are recommended. We showed up & waited anyway and ended up seated with some Spaniards who didn't know what to make of us. The food was so good I made a reservation for the very next night before the meal was over! I forgot to mention the Expo 2015 was going on, which is like the world's fair, but tickets were expensive enough that we said "nope", but was the reason for all the international flags draped along the streets of Milan. 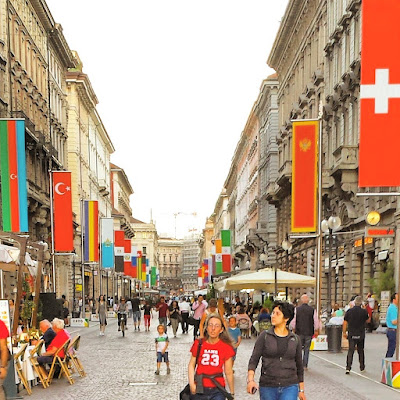 The following day we got our bus tickets to the airport, then went to Pinoteca Di Brera, an amazing art school with a museum that had an incredible collection including famous Italians like Caravaggio, Raphael, Bellini, Tintoretto and many more. 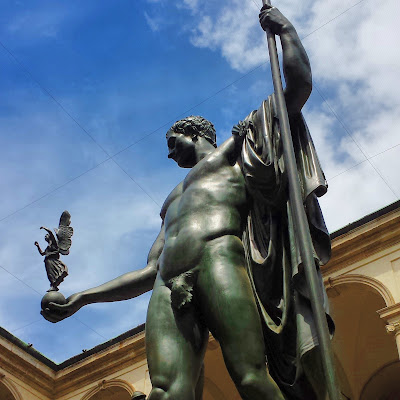 Then we went back to Sforza castle and saw the giant musical instrument collection there. It rivals anything I've ever seen, even the one at the Metropolitan Museum in NYC isn't as big or detailed. Fantastic! I was so into it I very nearly got our day bag locked in over night since we were so slow in leaving. Only some frantic running around saved the day. Good thing my Italian is still sort of functional!

That night at Cafe Nerino we still had to wait like an hour and again it was so worth it. At the end of the meal the manager brought out a selection of ice cold liqueurs for us to try to make up for making us wait...regardless of the fact that as you are waiting they serve you complimentary Prosecco. Truly phenomenal, definitely the best meals of the trip so far. I even had the same thing; sliced tenderloin, potatoes with bacon and spinach. Tell them we sent you! 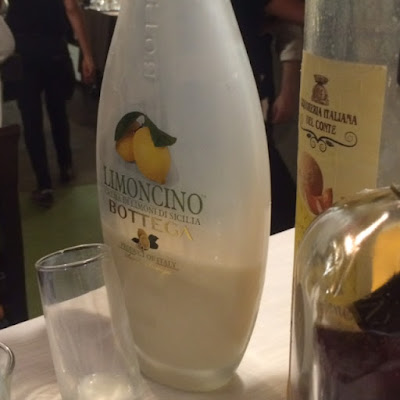 The next morning bus trip to the airport was uneventful, though it was a good reminder of how big the city really is! We got our flight to Amsterdam with no trouble and unsurprisingly that will be the topic of our next post! Thanks for reading!