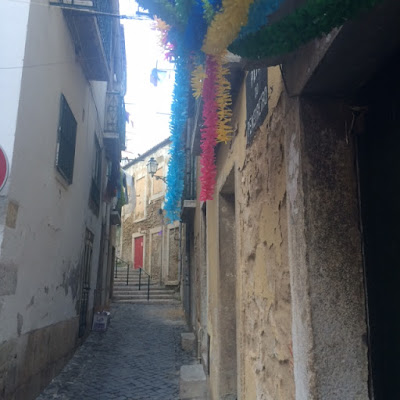 Get ready for a long post; we've been here two whole weeks! Woohoo! We fell in love with it almost immediately. We arrived on Wednesday afternoon July 1st with no trouble and got a cab to our cute little apartment in the Graca section of Lisbon, and walked around the hilly neighborhood some. Had some trouble finding a place we wanted to eat, found one that looked more like a neighborhood bbq than a restaurant, but it was so crowded we couldn't get a table...on to somewhere else. 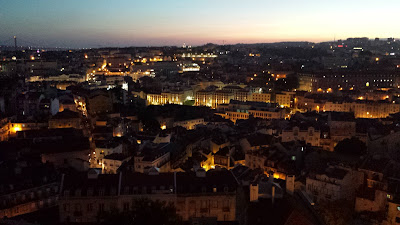 Thursday the 2nd: We went food shopping and found an optician, coincidentally. Finally broke down and got us both new glasses. Ours are both so scratched and I broke my mains twice and have been using the spares so that's done. It wasn't cheap but what the hell, had to be done. See? It's not ALL fun and games! Afterwards we headed up the hill to the Castello of São George & the museum there. They had some astonishing views. We ended the day with a nice dinner at home. 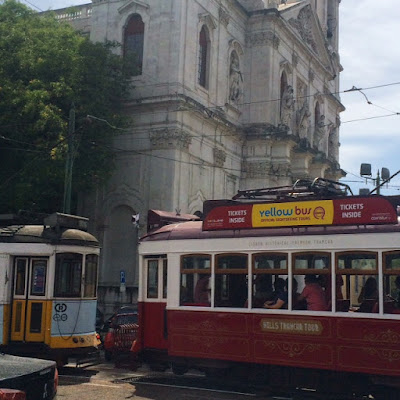 Fri the 3rd: We rode the famous #28 Tram through town taking in the sights and caught a bit of the waterfront concert series. We had a lovely, if somewhat pricey dinner at the famous Pinocio restaurant. PRO TIP: in Lisbon they bring you bread, olives, and such at the beginning and then charge you for them only if you eat them. If you don't want them, ask them to take them away. It was a tough night for sleeping- very noisy and tons of mosquitos! Ugh. See LuAnn's take on window screens in the previous post. 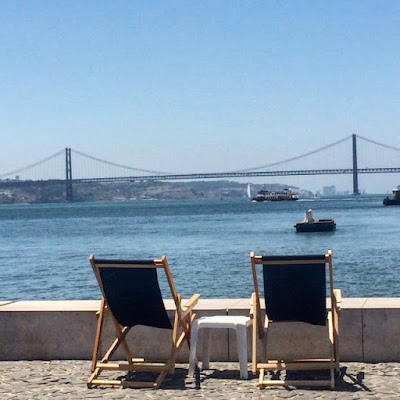 Sat July 4th! Independence day! Yeah, no one here cared. LOL. We slept late recovering from mosquitos & late night revelers. World outside the US! Why U no have screens?!?!? We watched Anthony Bourdain's Portugal episode from No Reservations and got the idea to have bifanas for lunch, which we did at Casa das Bifanas and WOW were they good! I had two of these delectable pork sandwiches! 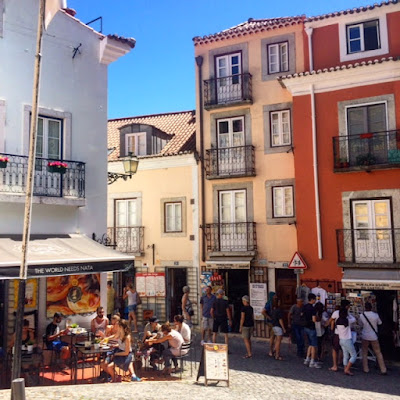 Hey, did you know Yelp had entries outside the US now? That's pretty great news because it turns out Trip advisor is basically useless for restaurant recommendations unless you are looking at the country/language you are in.  Anyway we came home and vegged out, watching movies, then hit the hay. I love/hate it when we have a TV to plug the laptop into. It's nice for a break but it's SUCH a productivity sink. Ron White sure is hilarious though. Watched a religious procession go by under our window, and heard fireworks in the distance, and were momentarily confused. We aren't in the USA! Turned out it was the Festivo de Lisboa at the Praca de Commercio: 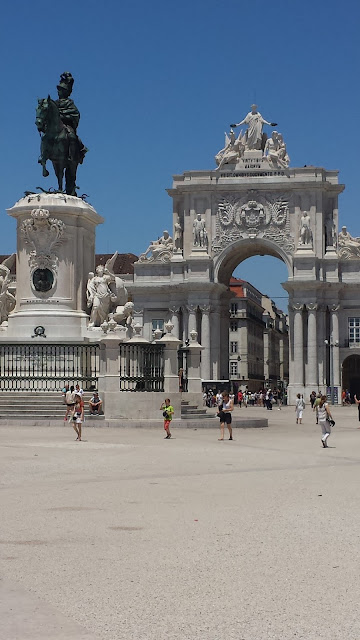 Sun the 5th: The news this morning was all about Greece voting No. Yikes. Lots of thoughts on Greece, but I try to keep politics off the blog. Suffice to say we feel for the Greeks. We found them to be a wonderfully friendly and hospitable people. As for us, we went to the Basillica de Estrela and the Jardim de Estrela across the street, then walked up to Eduardo VII Park and the saw greenhouses of Esfruta Fria there. Afterwards we walked home. 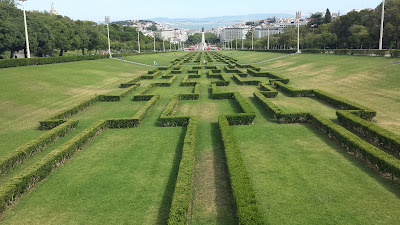 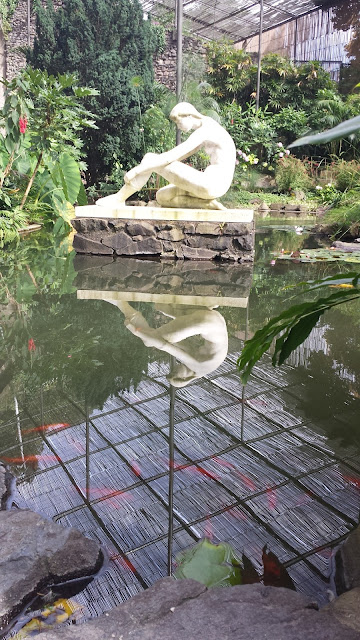 Mon the 6th: We went to Ribeira Market, the large food market in Lisbon, but got there too late.  Instead we caught the #15 tram out to the National Palace of Ajuda. They had SUCH a collection of statues outside, named for all sorts of virtues. Temperance, Fortitude, Strength and so on. Who knew there were so many virtues? The collection inside was astounding as well, though I often question the tastes of the time. Velvet wallpaper is just not my thing. The dining room that seats 160 was elegant and is still used, as we were told by an employee that it was being set up for a state dinner while we were there. 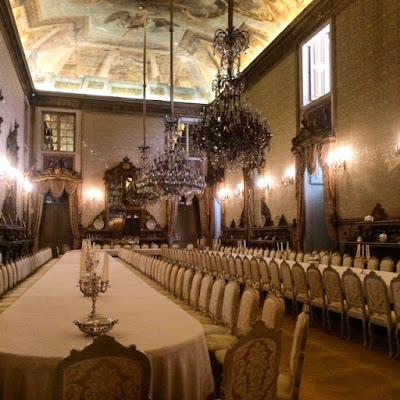 Tues the 7th: We caught the train to Sintra, and took the local bus to the Castelo Dos Moros and the Pena National Palace and Garden. Both were absolutely gorgeous. The whole area is worth reading more about. We actually discovered it watching the Amazing Race where it was a pit stop and at the time we said  "I hope we get to see that some day!" The castle is every 10 year old boys dream castle and the palace is straight out of Cinderella. Awesome! 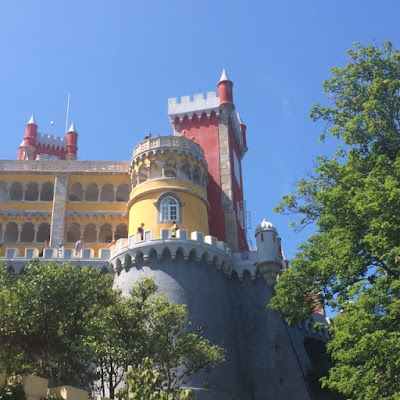 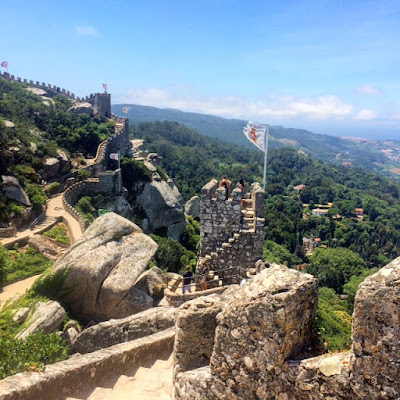 Afterwards was a low-key dinner in town, then the train back to Lisbon where we walked oh so very s l o w l y back up the hill to do some reading and crash. The shortest route home is through a street we came to call "Pusher Alley" because it was so obviously a place where they were selling weed, and more. All drugs are decriminalized in Portugal. They treat it as a health problem instead of a crime. Hence, low crime, low addiction and low prison populations. Wow, I wish some other countries would do something sensible like that! 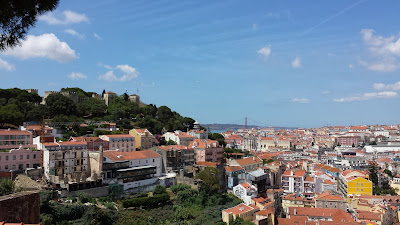 Wed the 8th: Big errand day! We got up early (for us), made coffee, got breakfast, we got haircuts, picked up our new eyeglasses we ordered last week, went grocery shopping, had leftovers for lunch, picked up our laundry and went to Oriente Station on the metro to get bus tickets for Lagos next week. Phew! Next we wandered through the Vasco De Gama Mall. Holy SHIT!!!! We haven't seen a mall since Singapore and before that Bangkok! Months! Not only that, we found the Portuguese equivalent of a Target (name?) ! I was almost brought to tears by the sheer volume of stuff and the number of choices! I haven't seen a bona fide supermarket really since we left the states. It was overwhelming, and not entirely in a good way. I hate to say it, but I must admit it felt a bit like home. That seems a bit shameful but what the hell? After so many months on the road to be able to find anything you want...sublime. LuAnn's eyes were glazed over. 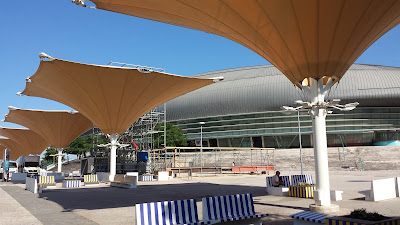 We walked through the whole mall and out to the river through the old fairgrounds when we realized the World Expo had been held there in 1995. Unlike so many countries who let their fairgrounds just disintegrate, Portugal has repurposed them wonderfully effectively. Good job guys! We got home on the metro (which is fantastic here by the way) and LuAnn made chicken parm! Woohoo! Serious comfort food! All in all, a fantastically productive day. 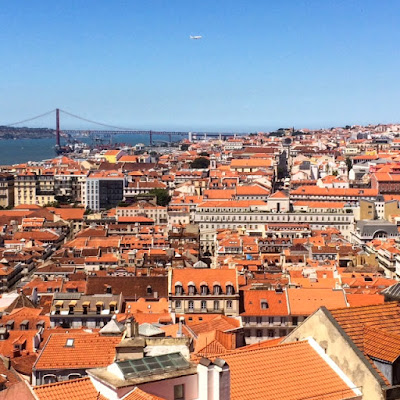 Thu the 9th: Ugh and Ow! Ow! Ow! Slept until 11 and both very slow moving. Two days in a row we walked about 8 miles (16km) so we were both pretty shot. While booking a hotel for the one night before we leave for the UK I am again struck by the complexity of the modern world. I've mentioned before how not having a fixed address upsets folks like the DMV, IRS, banks, INS, etc... No one can deal with nomads. That surprises me a bit because I know so many people who fit that description. The context of this point is that booking hotels, plane tickets, etc, etc... always requires a phone number and I don't have one. Gotta get one of those google voice numbers. I bet the guy who used to have my American number gets a lot of junk phone calls for me. I use his number a lot. Anyway we ended up going to the Monastery de São Viente de Flora down the street from our apartment which had such amazing azulejos tile murals, including a whole section illustrating Fables de la Fontaine! Amazing! 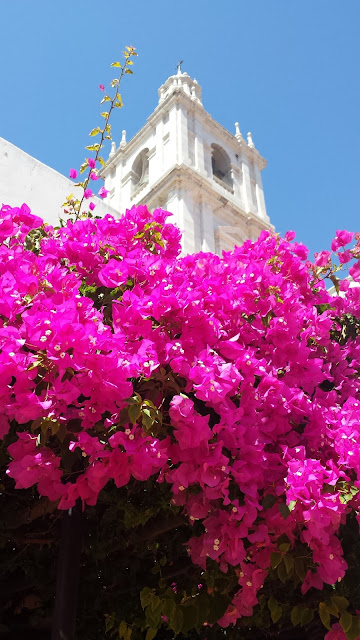 Fri the 10th: We did some cleaning & headed off to Museum of Calouste Gulbenkian. What?! Yes, we decided to walk some more. LOL. First some more bifanas though. I love those things! We took the metro from Rossio there and was it ever worth it. The museum was absolutely fantastic, full of all manner of great art works from all over the world. 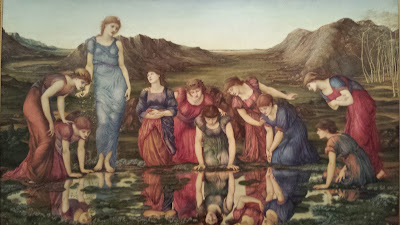 Afterwards we came home & watched The Theory of Everything, about Stephen Hawking. Then I had to re-read his book A Brief History of Time. So much to do! So little...uh...yeah.

Sat the 11th: We finally had a full crash. We were just too beat to do anything. Slept late, listened to Serena Williams win Wimbledon, surfed the net and generally did fuck all. When you are traveling full time you just have to have days like that every so often. You can't keep up the pace! We did manage to catch a little Fado, the local folk music, at a special concert on the way back from a dinner of Tapas at Tasca Del Sol where Francisco made us yummy shrimp and all manner of goodies! Here's a little Fado. Not the greatest audio OR video but what the hell?


Sun the 12th: We got up and walked down to the Cais De Dois train station and took Tram 15E again out to Belem Tower on the Tagus River (which reminds me of the Hudson!) and checked out the Monument of the explorers and the gardens, fountains and Monastery of Jeronimo. They have an interesting history museum with an exhibit about all the stuff they've found in the waters around here. 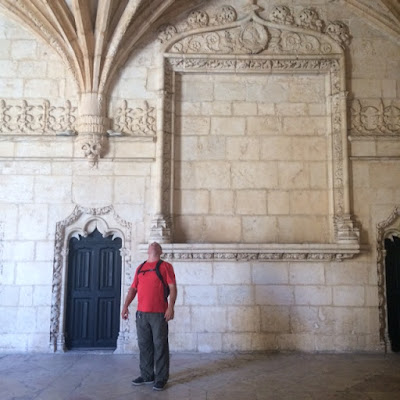 There was also the usual amazing church as well as the giant monastery with various exhibits, including an amazing one abut the last 500 years of history with parallel tracks for world history, Portuguese history and the history of the monastery itself. Fascinating! Came back and went to a cool little Fado restaurant on the corner of Sao Miguel and Sao Raphael called São Miguel D'Alfama which we highly recommend. Great music, great food & serice, no cover charge; all in all a lovely place. 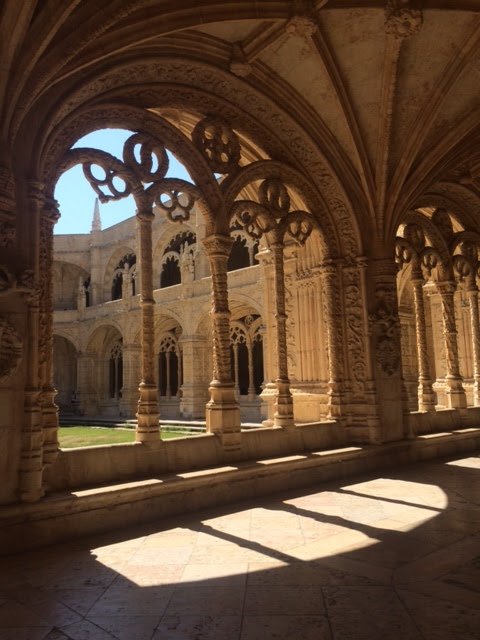 Mon the 13th: Our second to last day in Lisbon, turned into another low key day. Leisurely breakfast and reading, then lunch of Bifanas (yes, we are addicted), and some light food shopping. More crosswords, reading and a yummy home cooked salmon dinner and a hilarious and fun Argentine-Spanish language movie Wild Tales. 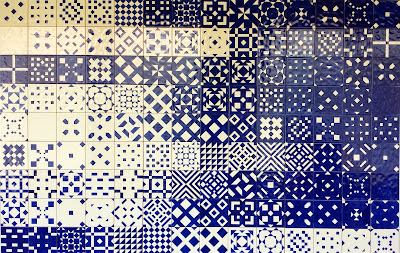 Tue the 14th: Our last full day in Lisbon, spent catching up on the blog, going to the flea market down behind the Monastery down the street and down to the Museo de Azulejos! Now making dinner & packing up to head to our next destination cause tomorrow we leave for Lagos! Yay! Back to the beach!
Posted by Andy at 4:54 PM