So much to tell since my last post! I'm slacking!
Tuesday Feb 3rd @ 1AM we got to Bangkok, got through customs & immigration, got a cab to the hotel & crashed. Got a cab, no problems, decent hotel. Fab. I only figured out later the 300 Baht was WAY too much for the short cab ride. Oops.

Tuesday at noon we got up, fixed a booking SNAFU and got to the Berkeley hotel (SWANKY!) in a hairy cab ride where the guy hit a moped and everyone waved & smiled and drove away. Tuesday at Berkeley Hotel was spent at the pool with beer and snacks, then a scavenger hunt to find Eathai, a crazy giant place where they had every kind of thai food from every region of Thailand. It was delish and cheap too!

I woke up Wednesday AM about 3:30 AM and spent the rest of the night trying to get back to sleep. Finally got out the door for coffee at Tom Tom coffee, then on a whim caught the ferry/water taxi to Phan Fa (which translates as "dancing through the sky") because the cop standing there was nice and spoke enough english to explain how it worked. Wait, did I say cop? I meant guy dressed like cop actually sending us into the well-known-to-everyone-but-us "tuk-tuk scam". The ride was fun though:

Went 4 stops on the water taxi and fell in with a tuk-tuk pimp who hooked us up with Wat, who drove us all over creation seeing several Buddhas & temples (including a bunch of shopping we didn’t want to do) for the bargain price of 40 baht. I bought LuAnn a nice pair of Valentine’s Day earrings but it was fine. Then things got weird.

At the hilariously named TIT (Tourist Information of Thailand? Seriously? That didn't set off alarm bells? Arg.) we booked buses and hotel for the coming week for about $50/day to Ayutthaya, Sukothai and Chiang Mai. Anyway, then off to a thai restaurant where we had a few beers and a lovely pair of Pad Thais, and finally to The Golden Mount (Wat Saket) where I rang every bell; all 800 of 'em! Seriously! 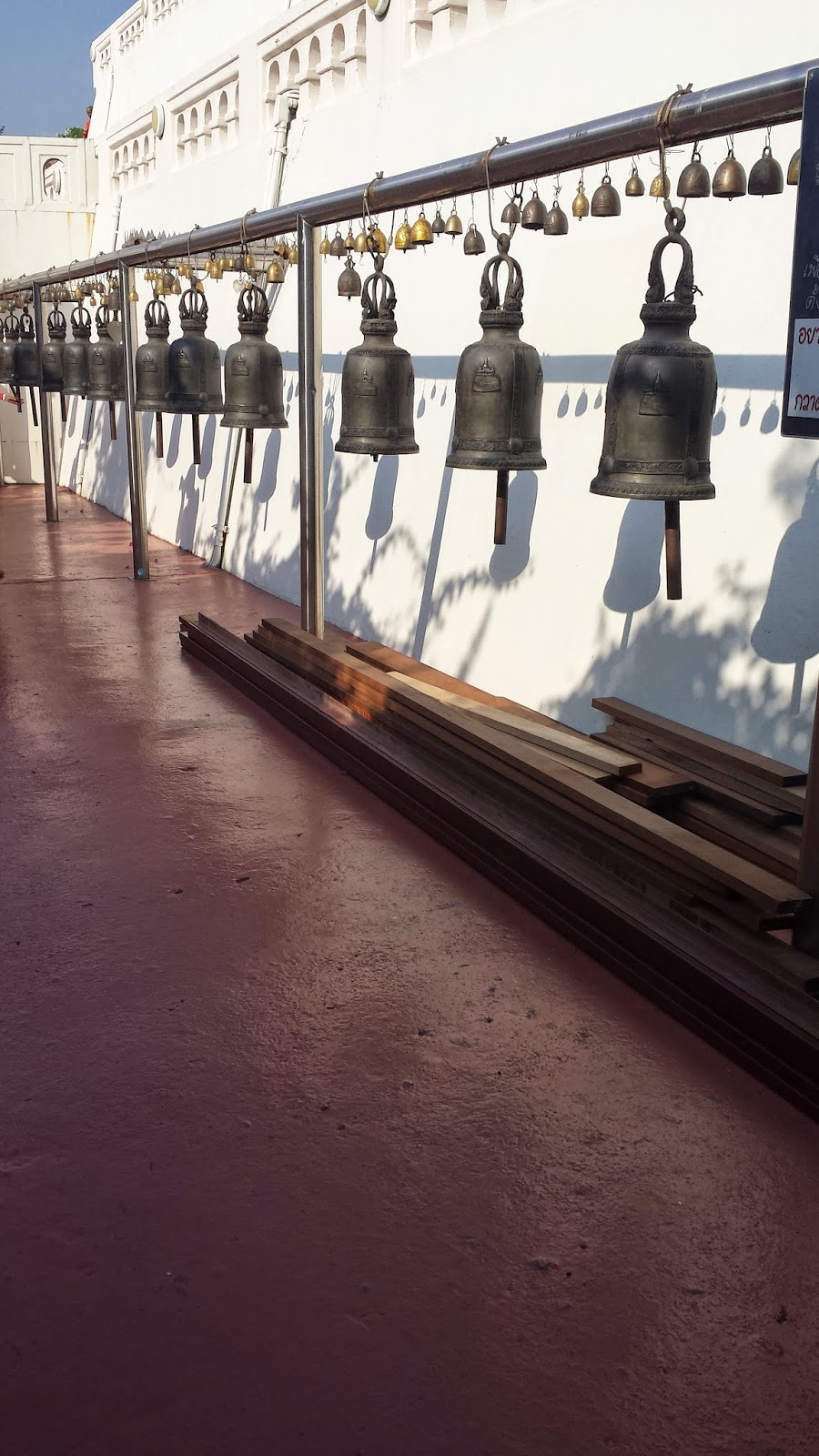 Alas, we never got to the Grand Palace and reclining Buddha (which was our intended destination). Took the boat back, got off at the wrong stop and had to walk back, but it was no problem. Only after getting back did I begin to think we might have been ripped off. After some panicked calls it turned out we were in fact booked so it wasn't a total loss; overpaid some, but not totally hosed.

Thursday we licked our wounds by the pool and did some planning for Angor Wat at Siem Reap, Cambodia, like getting our E-Visas since we failed to get the Visa extension here. Entirely my fault. I got cocky and failed to scout the ground adequately and take care of business. Anyway we booked the rest of Chiang Mai, and are mostly set for a week in Cambodia, then planning to head to the Southern beaches of Thailand before Japan in April.

Friday we met up with Aldeline and Melanie of www.CeNestPasQue.com and had a lovely time, then dropped off some laundry and had a great late lunch at a local place across the street that was on tripadvisor, but without an English name. :-)

After that we chilled at the pool some more (sound like a theme?) then got a cab to Vertigo and the Moon Bar for an amazing dinner in the open air on the roof of The Banyan Tree Hotel. Aptly named, you could look down 50 stories. Terrifying but awesome in the old school sense of the word. 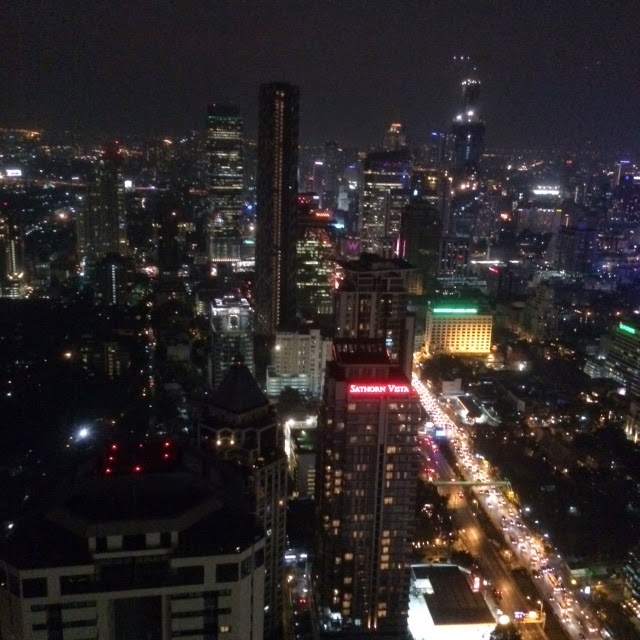 Saturday we got up early-ish, picked up the laundry and got coffee, then took a scammy cab to the Grand Palace. Guy wanted 700 Baht. I got him down to 500. Complete robbery. After spending the day templing we walked back to the river and got the water taxi back and the guy ignored me so pointedly (by not taking my money) that the round trip turned out to be 250 baht each way so $12? Not bad by NYC standards. The Grand Palace and The Reclining Buddha temple (Wat Pho) were fabulous though, so that made up for it. 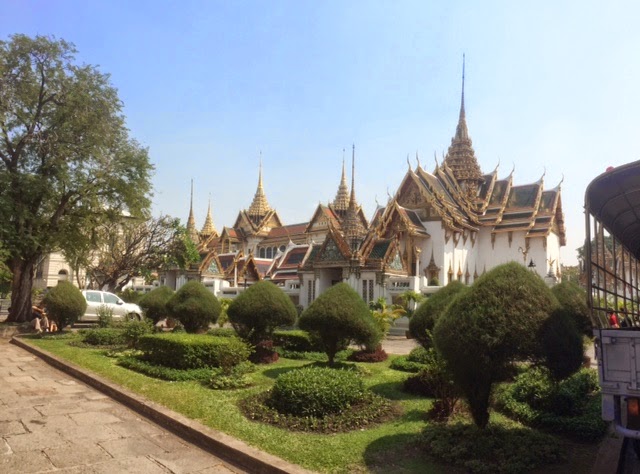 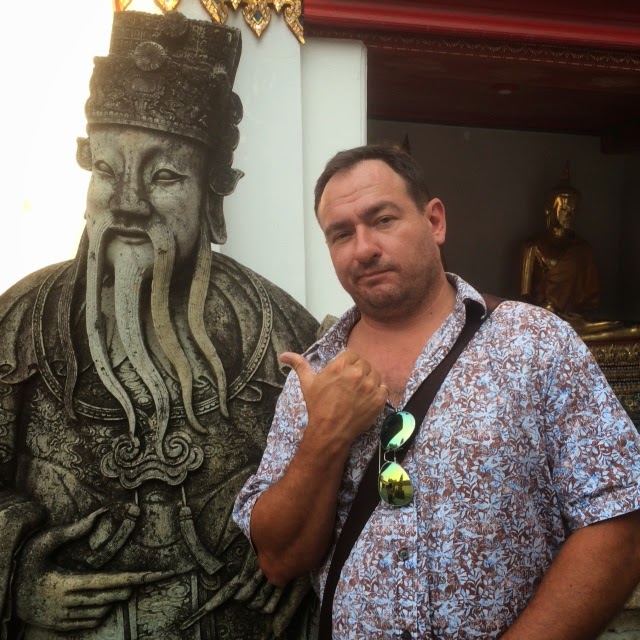 So we got the train to Ayutthaya and it was great. 40 baht and an hour later we were at our destination. The hostel was OK and they had the biggest dog I've seen in Thailand. So handsome but at 10 years old he was blind yet so cute & friendly! His name was, predictably, Baht-Baht! Sorry, no pic.

So we bicycled around the the Ayutthaya historical park and saw the iconic Buddha head in a tree: 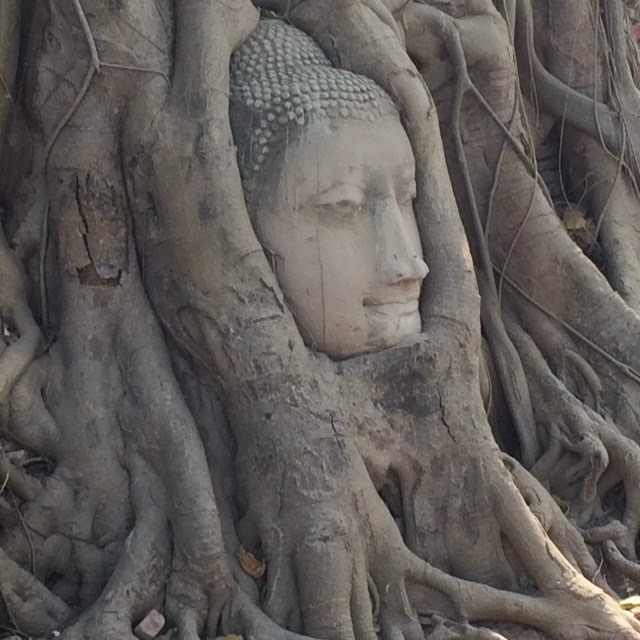 Got back and had a fun time jamming with some guys from Quebec. One guy, Nick, was traveling with Patch Adams (the real guy from the movie) volunteering at children's hospitals. He turned out to be an amazing singer. The hammocks were so-so. 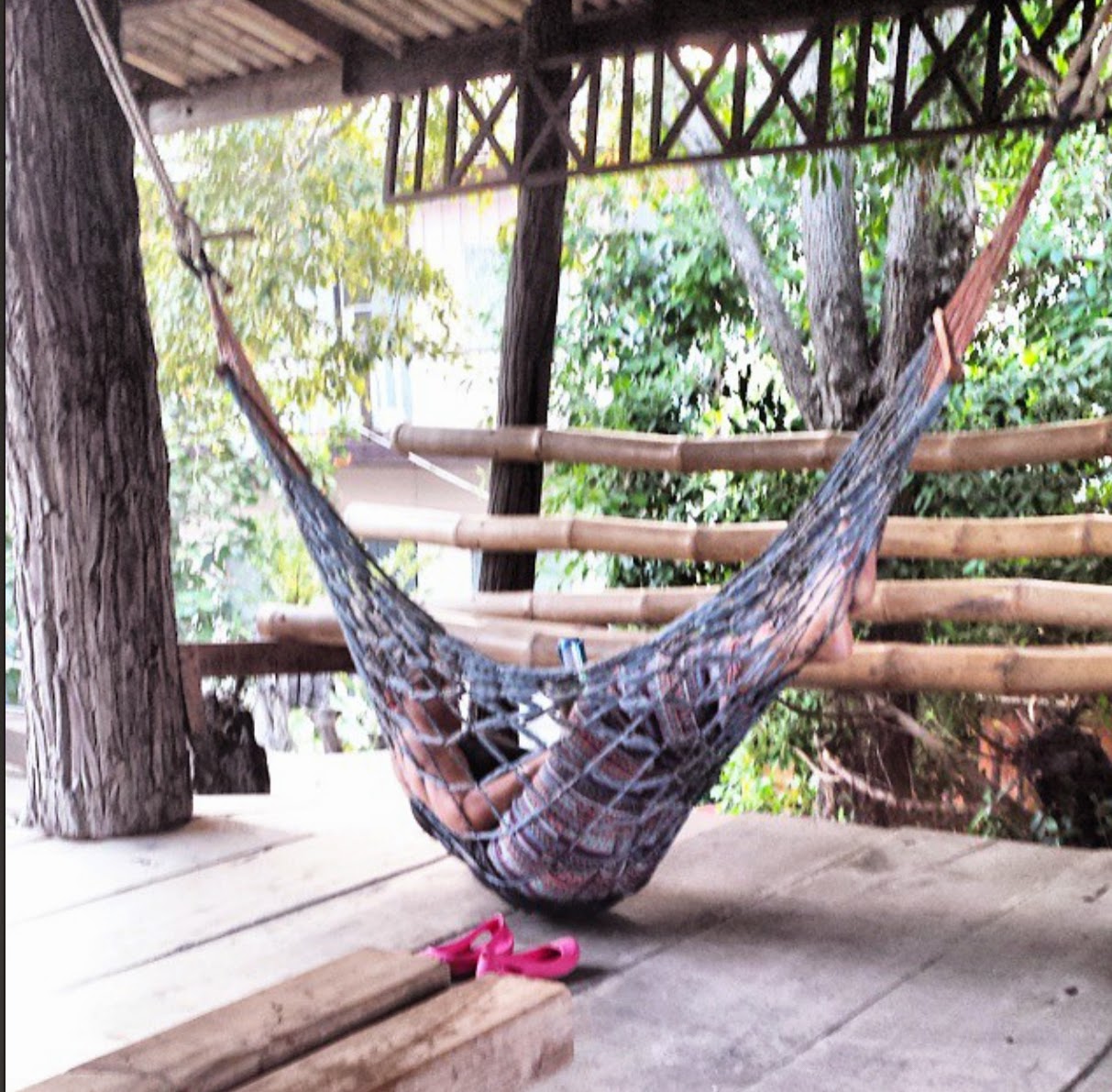 The bed was also just OK but we got up early and got the bus to Sukothai, the other ancient capitol and again hung out with al the other people who got scammed by the tuk-tuk drivers. In all it's been pretty great so we are not too pissed. We spent today at the Sukothai Historical park, which was amazing. 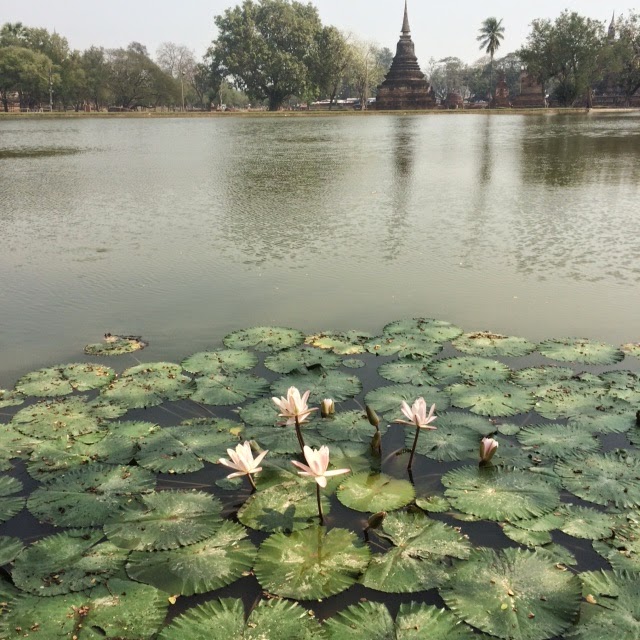 This evening we spent booking the rest of the trip through Japan here at Sila resort, which is also pretty darn nice: 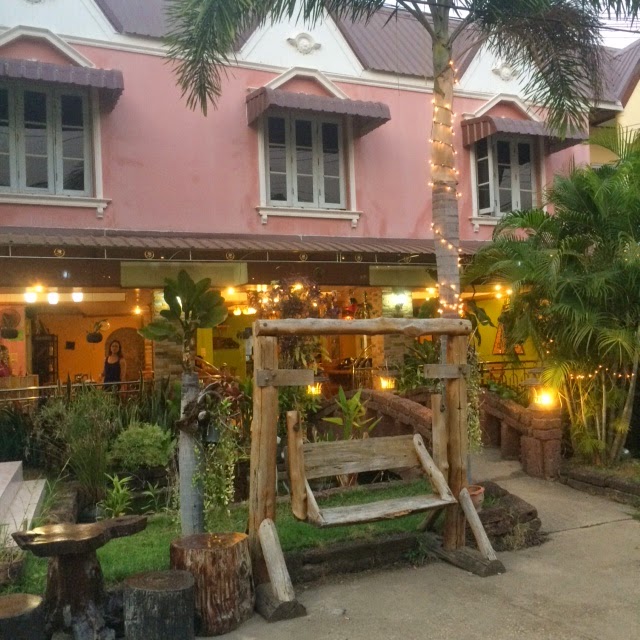 Tomorrow it's off to Chiang Mai!

As always, more pix in instagram HERE and HERE

If you like us on facebook you'll see the updates to the blog as we post the there, plus we love you long time! :-)
Posted by Andy at 5:37 AM