Malvern, England and the Cotswolds Pt I


Hello again! Here's our post about the first half of our stay in the English countryside! BTW have you seen our Facebook and LuAnn & Andy's Instagram? 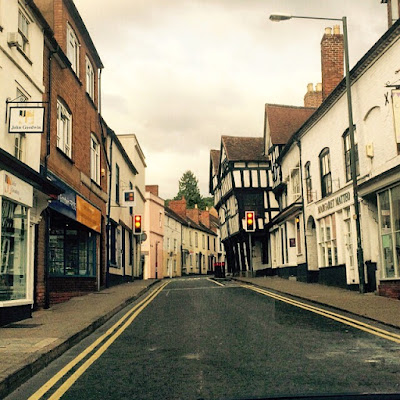 Sorry for the wait but every two weeks seems to be our rhythm lately. The train ride to Malvern Link was uneventful, though I thought I would have a heart attack when two pre-teen siblings sat opposite us for a 3 hour ride. Fortunately they got off at the first stop before they drove me crazy. 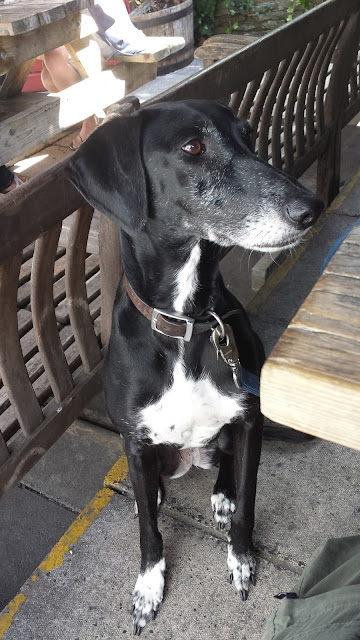 Our host Martin met us at the station and drove us around the corner to their house to meet his wife Natalie and Nessie, a sweet 8 year old black greyhound mix the brits call a lurcher. They are going off to house sit for a whole farm of ducks, chickens, goats, etc on Vancouver Island in Canada whilst we mind their house and hound here in England. They're lovely people with a beautiful home and we are feeling quite lucky. We feed and walk Nessie daily, though so far we are taking her on more and much longer walks than I think she is used to, but she doesn't seem to mind. 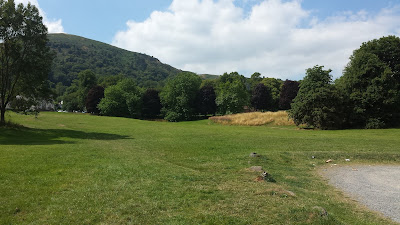 We took a really long walk up the hill of Malvern Hills but didn't quite make it to the beacon, which is the very top. We had a lovely lunch at Nag's Head Pub, which allows dogs inside and out of the actual pub. There were some comical characters there, Helen who runs a dog rescue who loved Nessie and an old fellow who looks like he practically lives there. 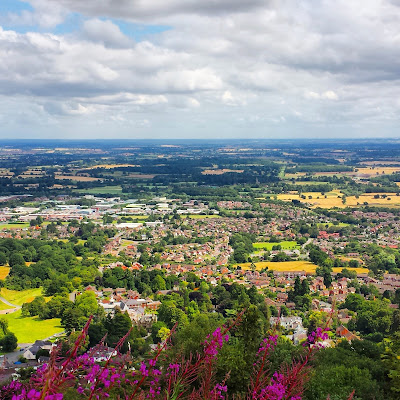 Next day we walked down into Malvern proper and got LuAnn some art supplies and then went up to St Anne's Well. Several people had said the food there was great but it was strictly veggie and no pints so I coldn't be arsed. Instead we went back down to Nag's Head and it was again delish. 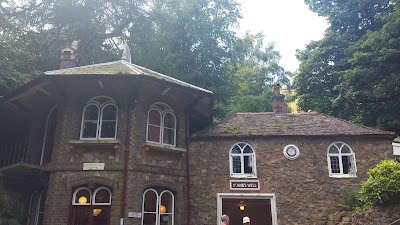 We went home and the three of us cuddled up since there's nothing the Ness likes better than a good snuggle. Afterwards I went out for a few pints and met a bunch of local chaps who all knew Nessie. Gary, the local pub owner, was a stellar chap and his daughter was getting married the next day so he kicked everyone out at midnight. Mark, Brad and Simon were charming blokes and I had a good time trying to understand their accents. Here's a pic and hey! It's the #Roadbear! 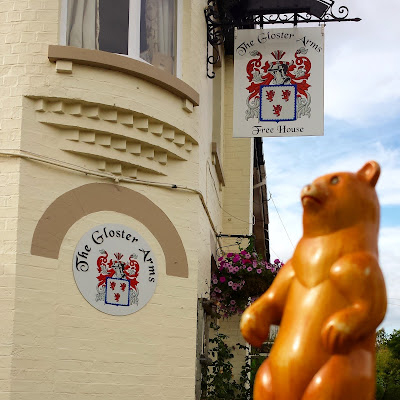 Next day was the start of Malvern Rocks, a weekend of concerts all around, but we were super lazy in the morning mostly lounging around ahead of going out for the evening to see a bunch of bands. The four we saw varied quite a bit, quality wise. I wrote a detailed review but realized to one cares so I'll spare you. Sunday was another lounge around kind of day. We slept in, had breakfast, did some food shopping, then came back for a nap. LuAnn worked on her painting commission  and we walked Nessie around the park and pondered the awfulness of buying a car when she goes back to the states next week. I want this one: 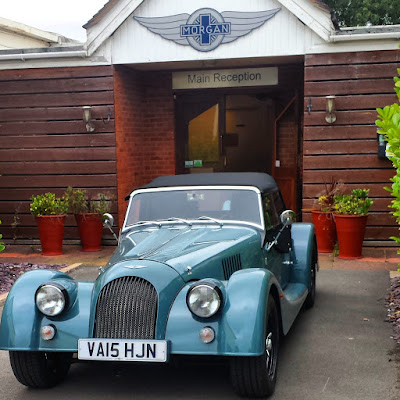 We can't even believe that's happening but she got the job in Jacksonville, Florida so it's time to refill the coffers of this establishment a bit. We are actually looking forward to being in Florida for the forthcoming winter and being in one place for a spell. We counted up 52 places we have stayed in since we left last November. That's about 40 weeks, call it 280 days, so on average we moved every 5 days. In practice it was more like every 3 days, with breaks of two weeks here and there but anyway we are both ready to be parked for a spell and Jacksonville looks like as good a place as any to regroup. Here it is: 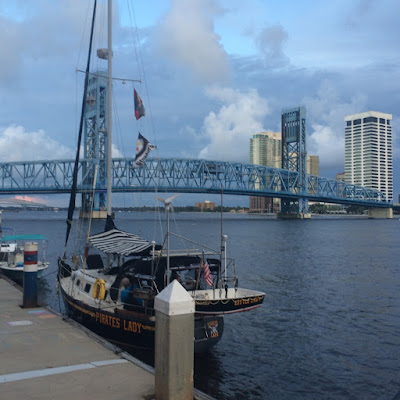 That night we went to see a rhythm and blues revue with horns at the local pub called Rattlesnake Jake and they were great. We danced the night away. Good thing we forced ourselves to sit through the opening band, who were horrendously awful. Monday was another low key day spent reading, writing, playing, painting & walking the dog.  We went food shopping and booked the next day's tour. 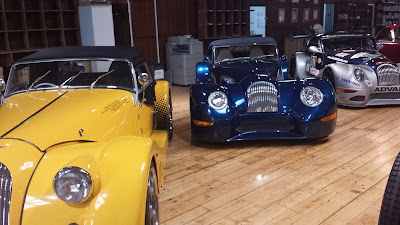 Tuesday we toured the Morgan Motorcar Company and saw all the beautiful cars being hand made. They have quite an operation. They aren't cheap but they tend to increase their value. Alas they only have passenger airbag so you can't import them to the US. Thank you, Nanny State. This is why we can't have nice things. Surprisingly they are mostly left-hand drive models because they are mostly sold throughout Europe (where they drive on the right), not the UK. The most unusual of all their models is the 3 wheeler. 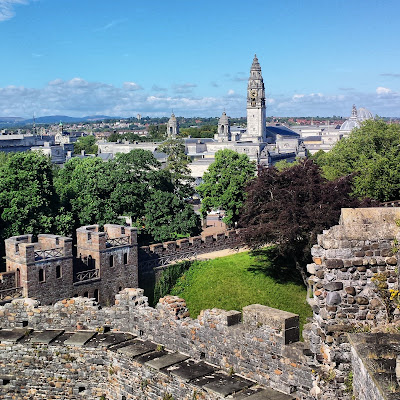 Wednesday we rented a car and drove to Cardiff, the capitol of Wales, and saw the castle there. We've now seen two of the four capitol cities of the UK, the others being Edinburgh, Scotland and Dublin, Ireland! Next time! 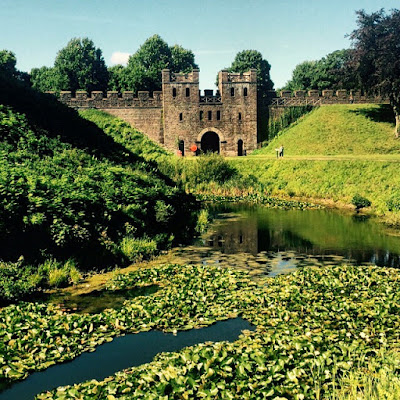 We drove through several lovely villages and LuAnn loved seeing all the many Welsh ponies along side the road. We missed a turn and ended up driving through some nasty industrial areas. Oh well! Adventure! You can't be lost when you have no destination. 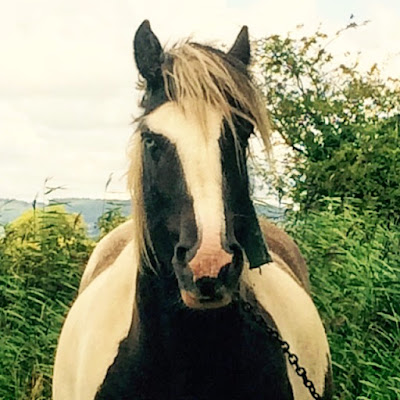 We ended up parking at the mall and at first we were like "Uh-oh!" but we got out of there and went to a little specialty beer place where the barkeep Jordan hipped us to a cool Italian place there where we had a delicious lunch on Church St. The castle, keep and mansion took a good couple hours to get through and was all around stunning in it's beauty. Then we drove down to the seaside in Penarth. Some of it reminded us of Cape May on the Jersey Shore. 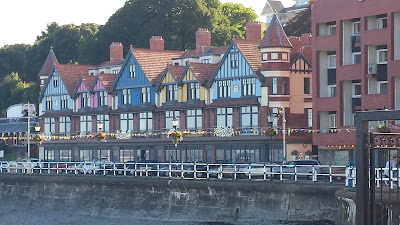 Thursday we slept in. I returned the car and we had another mellow day. LuAnn worked on her painting and I played guitar and napped. LuAnn made Chicken cassoulet, a delicious comfort food type dish which we needed because the weather is so shite. It's very cold and clear in the mornings, then it gets warmer, but also clouds up and either threatens to rain or just plain rains. I've never seen such changeable weather. An umbrella is a permanent fixture in our backpack here in England.  Like everywhere we've been this whole year, the locals say they are having weather unlike anything they've seen before. Bad news. Friday night we got a cab to Ask Italian, a local restaurant. The food was OK. Tried to find a band afterwards but no dice. Disco karaoke? No thanks. 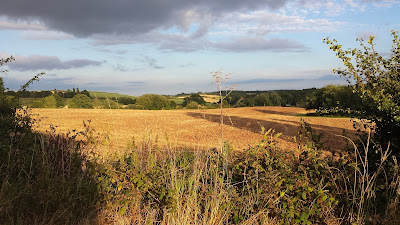 On Saturday my friend Stuart came from London and took us round the Cotswolds to Broughton-on-the-Water, Broadway, Spetchley Gardens  and finally Worcester (pronounced Wooster) Cathedral. 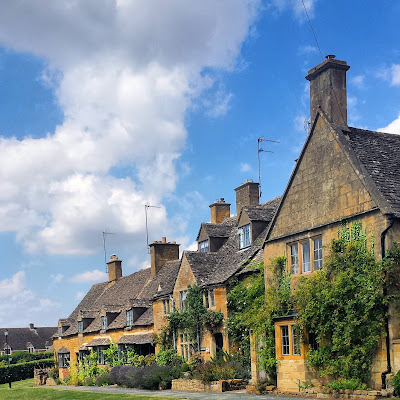 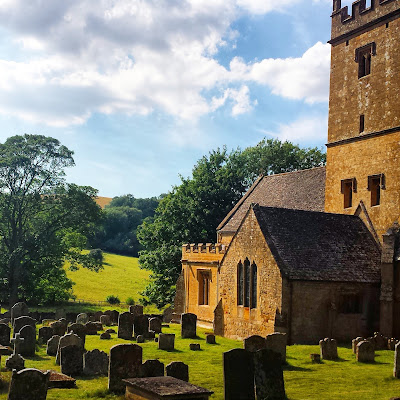 There are really no words to describe the beauty of this area of England. Several people have mentioned to us that they invented green and it seems so. Broughton-on-the-water and Broadway were villages that look like they came straight out of a children's book of fairytales, old english cottages with perennial gardens bursting with color. 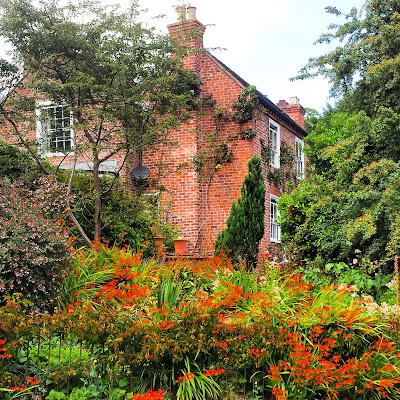 We wandered around Broughton and had lunch there, but this sunny Saturday in August we were not the only ones with this idea, so it was quite crowded. We arrived at Spetchley Gardens about an hour before close, but it turns out there was not a lot to see as they were doing some renovations. There was a very old church dating back to the 1100's which was quite interesting and more than a little creepy. Worester was on our way home, but with a service going on a quick peek into the cathedral was all we could manage so we missed the tomb of King John for which the Cathedral is famous. Here's the cathedral: 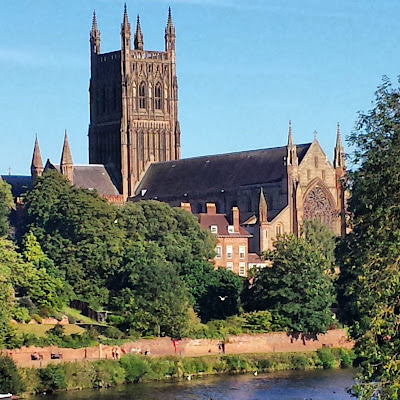 Sunday...it would be better if I kept this up each day. Trying to remember what we did is a big pain, what with my ancient failing memory chips. Generally we have been taking it easy compared to our usual pace, we do some crossword puzzling, play backgammon, paint & play guitar, walk the hound and watch movies or read. It's wonderfully relaxing. When the dog gets me up too early as she is wont to do I sometimes have an afternoon nap, a custom I shall miss when we are back to work. 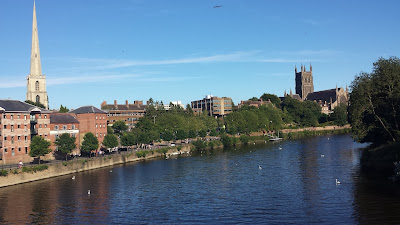 Monday it was kind of rainy so we did errands, and generally did more of the above. We tried to watch a David Tennant Dr Who since we had had a conversation with Stu about the whole backstory but we just couldn't get through it. Gotta try a different Doctor maybe. 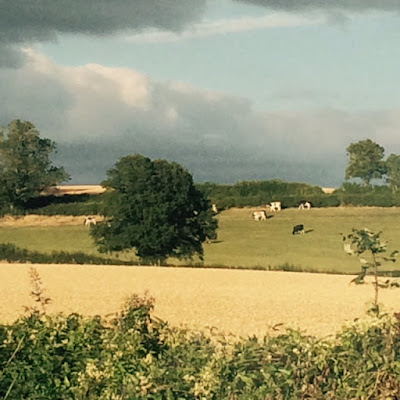 Tuesday, another early rise. I should say a few words about the hound. Nessie is a lurcher (those are dogs before you ask) which is a cross between a Greyhound and (in her case) a lab, though they can also be crossed with Collies and other types. This sets my dog breeding self on edge as I imagine all the American purists recoiling in horror. Purposely crossing purebreds?!? But actually she is a darling dog. We tends to wake me up whimpering at the door about 6:30 and I feed her and let her out. Then we usually pile back into the bed until 9 AM, then coffee & breakfast, after which we take her for a walk. We try to take her with us when we go out if we can. We stopped into the local pub, the Gloster Arms, for a couple pints and a nice chat with Mick and Pauline, a brother and sister from the area. They were much curious about America and it was fun exchanging information and stories. Afterwards was zucchini boats from the garden and watching a movie.

Wednesday we spent packing and getting LuAnn ready to head to Florida to start her new gig while I stay and watch the hound two more weeks. It's gonna be tough to be apart after all this time together. Some people said we might kill each other being together constantly but that didn't happen. In fact we already miss one another.

This is actually the two week mark so I'll sign off now. The next post should be a little sooner. Maybe I'll do one next week! Cheers mates!
Posted by Andy at 4:14 AM