Kampuchea AKA Cambodia and back to Thailand for the beach

Or "A Comedy of Errors"

A large number of our travel pals assured us that getting a 60 day Visa for Thailand was a snap. What no one said though was that you have to do it before you arrive or it becomes a huge PITA. What's more although no one in Thailand immigration said one word about onward travel, Emirates wouldn't let us on the plane without tickets out of Thailand so we bought a cheap flight to Siem Reap since we wanted to see Angkor Wat anyway. That turned out to be good because apparently if you go overland you only get 15 days, not the full 30 you get arriving by air. I truly wish they would stop fooling around and just make it 90 days already. Sheesh. Seems like the immigration rules change weekly, depending on who you talk to.

Cambodia was amazing yet heartbreaking. They have been caught between Thailand and Viet Nam for centuries, plus they were caught between the US and Russia in the proxy war in Viet Nam which saw millions of bombs and land mines deployed there. One in every 290 Cambodians is an amputee due to land mines. 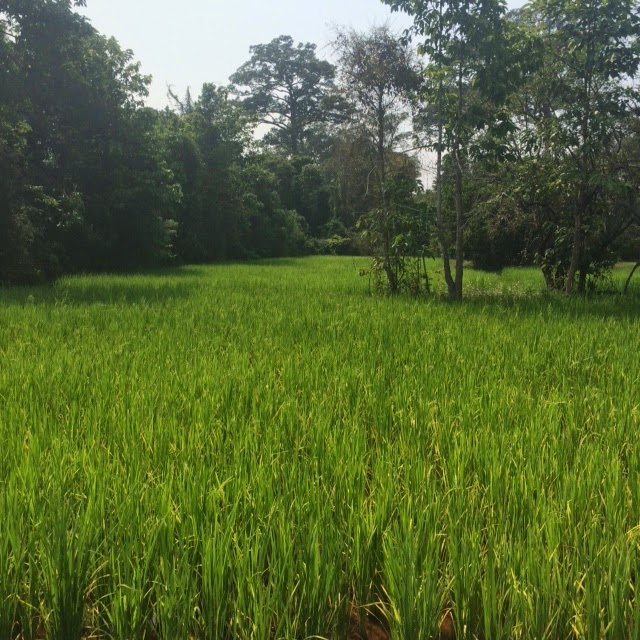 Then they became victims of the worst kind of brutal communist dictatorship that tortured and killed 2-3 million people, about a quarter of the population. They would kill you for wearing eyeglasses because that was the mark of an intellectual. Holy hell. Pol Pot and the Khmer Rouge were monsters of the vilest sort and are a good reminder that communism kills as many or more people than fascism.
Meanwhile, I have never met a nicer, kinder, gentler group of people anywhere. It makes me wonder how The Khmer Rouge found anyone for their ranks but I guess when someone sticks a gun in your hand at 10 years old and tells you they'll kill your whole family if you don't do what you're told...
There is no doubt the country has many challenges. Poverty and lack of food and education, as well as severe government corruption is messing them up still. The Cambodian Circus not only puts on an amazing show but helps feed and educate children and teach them skills in the arts. I strongly recommend supporting them and do not fail to see the show if you are in Siem Reap.

Since we were there mainly to see Angkor Wat I will let LuAnn tell you about that: 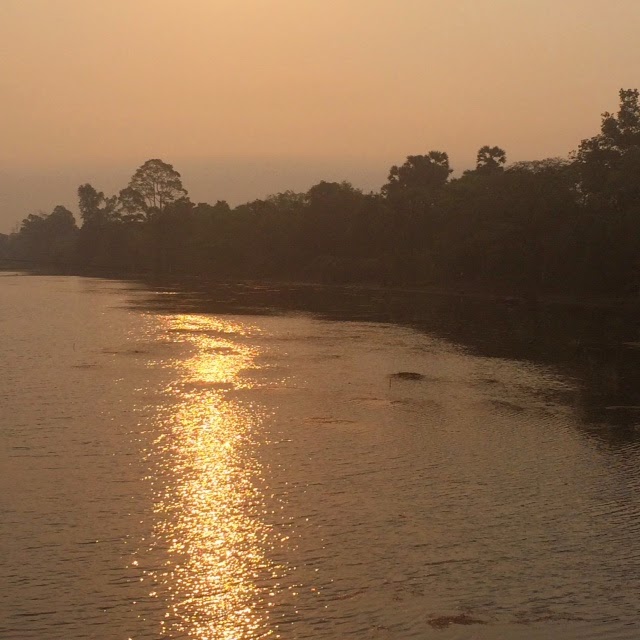 We took 2 half day trips to Angkor Wat. Its a huge area made up of many different temples and complexes. I won;t go into the whole history of the place, but most was built between 900 and 1200.
The first day our tuk-tuk driver, Sok, picked us up at 5:00 am to see the sun rise from behind Angkor Wat. This is the iconic photo most of us have seen. Although we didn't care too much about getting "the perfect photo", we did want to see the spectacle, and tour during the morning when the heat is less. Lucky that we weren't intent on getting that perfect picture because we woke at 4:00 am to a terrific rainstorm. So when the sun came up at 6:00, even though the rain was over, it was misty and the air super heavy. A less than spectacular sunrise, but it was an experience to remember making our way through the dark, on the ancient walkways, trying not to trip. Very eerie. Then once the daylight appeared, everything being revealed to us. We toured the main Angkor Wat temple, Angkor Thom, and Ta Prohm. Ta Prohm was probably my favorite- this was the temple used in Tomb Raider, with the banyan trees intertwined with the temple. 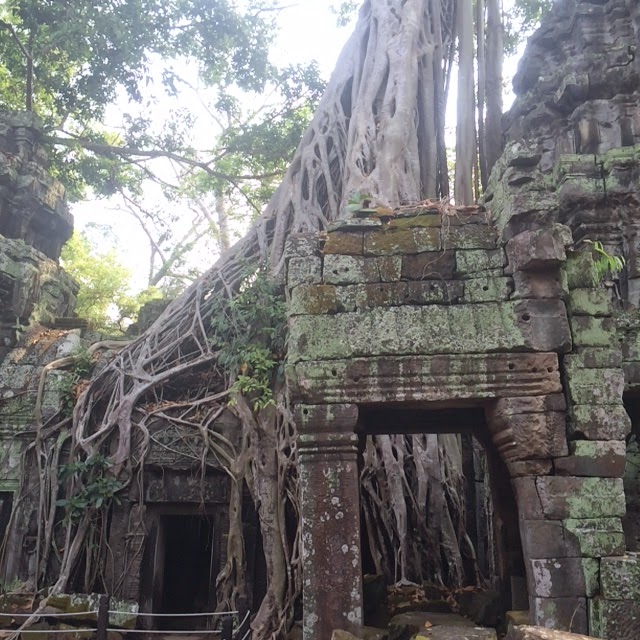 The second day, I actually went without Andy, who was feeling under the weather. This time, Sok picked me up later in the day, and we headed for Banteay Srei, which was about an hour away. I got a good overview of the Cambodian countryside, which as Andy mentioned, is heartbreakingly poor. The temple itself is known for its very elaborate carvings, which I could have looked at all day.

On the way back, Sok stopped at the Cambodian Landmine Musuem. I was somewhat reluctant to go in, but I was glad I did. My $5 admission price, I'm told will go to the school they run for the children injured by landmines, as well as the NGO's which are still trying to clear the mines from the countryside. 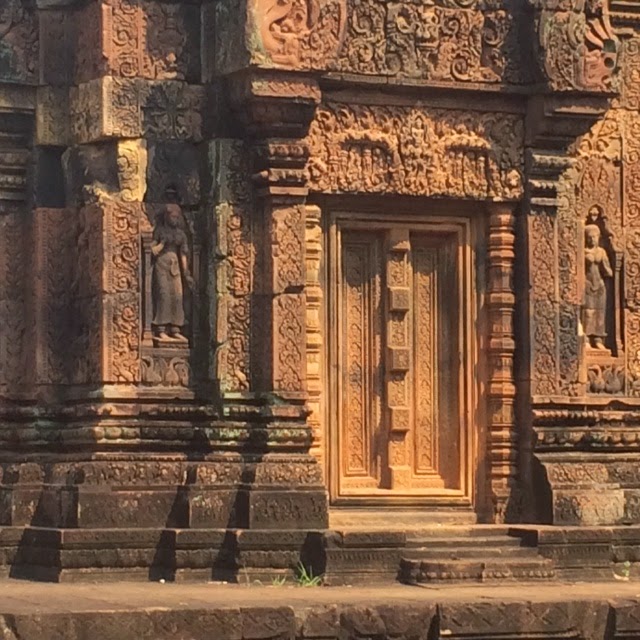 A few more temples after that and we called it a day. I was very happy to immediately dip in the hotel pool, because let me tell you, I don't think I was ever hotter in my life. Man was the Rose Boutique Hotel great. 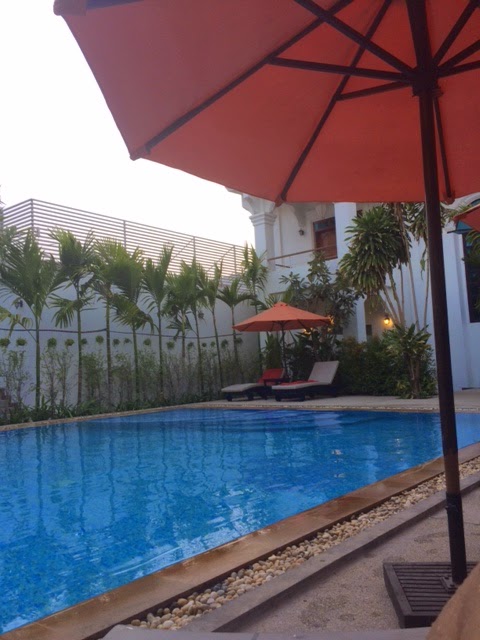 As always please follow along by clicking on the social media links on the right there.
Many more pix on Andy's Instagram and Mine. Over and out!
Posted by Andy at 12:05 AM