A Day in Guanajuato


If someone said to me even a year ago that I would be traipsing through Guanajuato, Mexico following my son Austen, in search of the Museo de Momias (yes, mummy museum) I would have, of course, said they were crazy. But that is exactly what I was doing last Sunday.

Our adventure to Guanajuato was a day for the memory books. Andy was feeling poorly and decided to stay put in San Miguel, so Austen and I set out on our own, with our limited (me) to non-existent (him) Spanish. Its about an hours bus ride from San Miguel to Guanajuato, but even on Mexico's luxury buses the twisting mountain roads left us a bit woozy. After a bit of a re-coop in the bus station, we were off in a cab to see what Guanajuato was like. We had heard the first thing one should do when they get into the city is take the Funicular to the top of one of the mountains and behold the view from the look-out. It was, in fact, amazing. The city almost looked like a model to us with all its colorful buildings all nestled down in the valley. 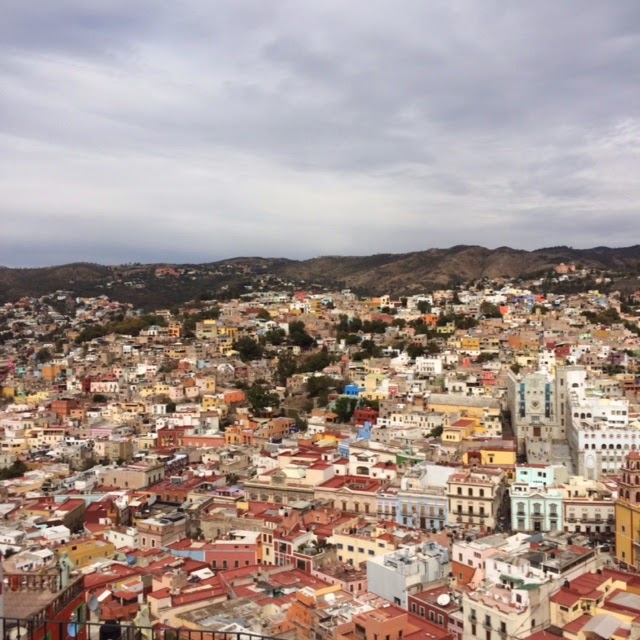 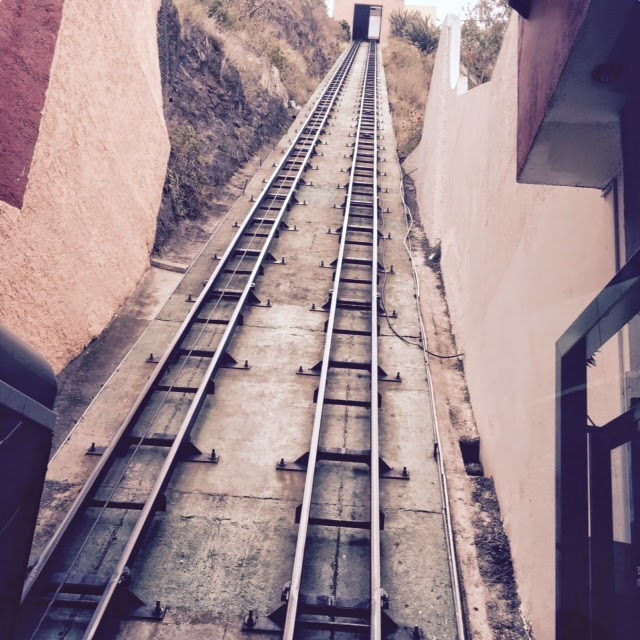 By now it was lunch time, and even though we know better than to eat in the restaurants right on any plaza, since they are rarely good, we couldn't resist just choosing one in the main Jardin de la Union. This plaza is simply gorgeous under a canopy of trees. Unfortunately, due to my aforementioned limited Spanish, we ended up with a bowl of cheese for lunch. 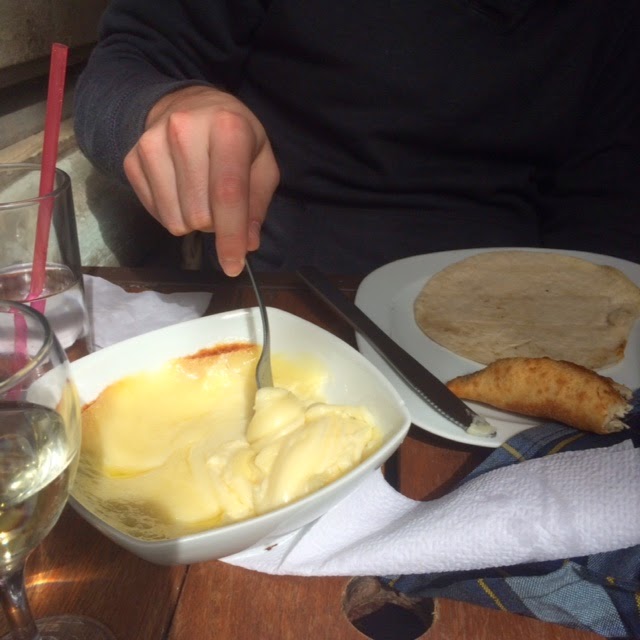 No worries, however, I was anxious to be off in search of the Diego Rivera Museum. I had been remotely aware of Frida Kahlo and Diego Rivera before this trip to Mexico, but nowhere here  can you get away from images of her....they are everywhere: t-shirts, statues, paintings, street art....in fact, there is a popular t-shirt with Frida in a Daft Punk t-shirt, which is just awesome in my humble opinion, because she totally would have been into them.

So, I was severely disappointed to find that said museum was closed. On Sundays at 2:00....in a teeming city on a holiday weekend. Oh, Mexico. Hmmm. Now what, we asked? Lets see....theres a Mummy Museum? "Cool!" says Austen, "Lets go!" Now, I'm not so sure about this whole endeavor, but we do see a sign that says its this way down the street, so off we go....and we walk, and we walk, and we see another sign, and we walk...we note that the signs do not indicate how far it is. Soon we are doubting the existence of this museum at all. However, we notice two girls that seem to be on the same path as us. We are both moving with some speed, and both with backpacks...Austen and I joke about how we feel like we are in the Amazing Race and on our way to the pit stop...."teams must climb up a mountain of 25 flights of stairs to the Museo de la Momias for the next clue! The last team to arrive will be eliminated!" Because there were about 25 flights of stairs...and yet no museum to be seen. Finally, after realizing we just walked up the same mountain we took the Funicular up earlier, we see it. The Museo de la Momias in all its glory...and a line longer than any I have ever seen. Seriously? Apparently this is a popular outing for families from far and wide on a Sunday during Christmas week.

A word about this museum, that we never got to go into. The story goes that since Guanajuato is a mining town, and the soil is so high in minerals, these dead people were naturally preserved. And what you see in this museum is not wrapped up mummies, but flesh and bone, and hair and facial expressions. After reading this, I was somewhat relieved that the line was too long. There is something totally bizarre about this..especially after I read these dead were exhumed after the taxes were raised on their graves, so the relatives of the dead either had to pay, or apparently their beloveds were dug up and now propped up in this museum for everyone to gawk at. 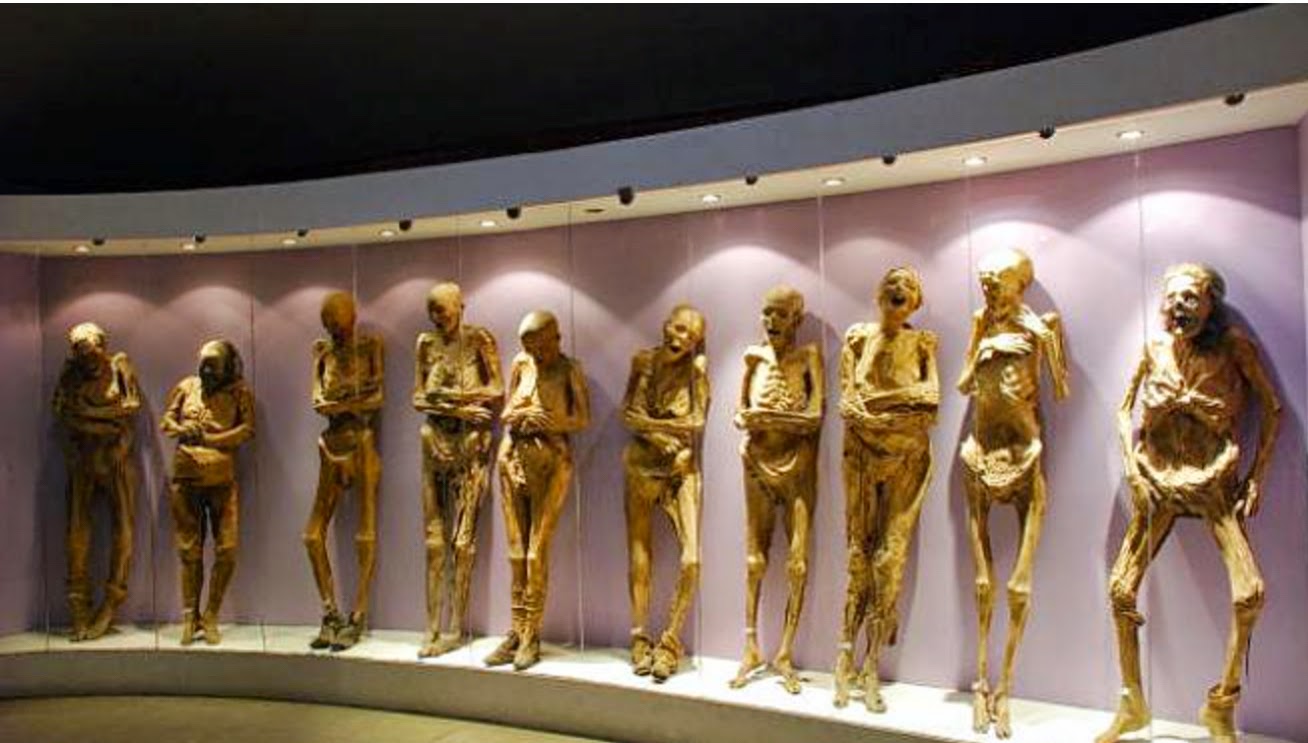 We gave up. There was no way we were going to stand for hours to get into this place. Instead, we chose the bathroom line, which was not quite as long. Again, we missed an important detail. We forgot to get our toilet paper. Yes, in many places in Mexico, you pay to get into a bathroom, but you must remember to get your square of toilet paper from the lady standing outside with a roll of toilet paper. Oh, well, foiled again. We imagine she was thinking..."Stupid gringos, they probably think the toilet paper is in the actual bathroom!"

We made our way back down the mountain, and rewarded ourselves with a dessert and a drink. Much deserved we thought. And so concluded our day in Guanajuato.

And days like this are why I am traveling the world.  -LuAnn